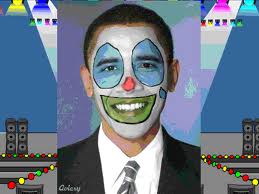 What is the true definition of an “ass clown?” Most of us use this somewhat sophisticated term on a regular, if not daily, basis yet I have always wondered exactly what it means. I had to look it up.

one, who, through the fault of his parents conception, is a skid mark in society’s collective underwear. Source www.urbandictionary.com

I wanted to get that straight because I am an aspiring journalist, and if I am going to call someone an ass-clown publicly I need to have my facts straight. So today we are inducting our first three “thugalos” into the ACP (Ass Clown Posse).

The first thugalo would have to be James Hoffa, president of the International Brotherhood of the Teamsters. Hoffa’s “civil war” prediction did nothing but further incite his thugs. Mr. Hoffa, I am in your database. I am a former member of local 823. If you want a fight you know where I live. Unfortunately your remarks were incendiary and you did nothing but fire up more of your thugalo wannabes. You lost, it’s over. Your stronghold is lost.

If you would have taken those union dues and offered real protection to workers it might have been a beautiful thing. You did not so stop acting like this is about workers and be honest with us. Labor unions tend to get upset when the dues stop coming. Is that why you failed to support us and failed to deliver on promised union votes in Missouri? Is it because you knew the union dues were drying up with the Hydro Aluminum closing? I’m sure you weren’t even aware of a petty 100 or so lost jobs. Why don’t you start acting like you really care about people and get in the trenches with those who are paying for your help? If you would have done that for me and my “brothers,” I would have been a lifelong supporter. To me you are just another whiny bitch who didn’t get his way. How dare you stir up more emotions at a time when people need to be calm and collected? You fit the definition of ass clown. You left a mark like last nights chili in our collective underwear.

The second ACP member would have to be Gretchen Whitmer. WTF is this woman thinking? She showed all of America what we hate about politicians. She called for Emperor Obama to withhold funds from Michigan that are earmarked for an International Bridge to Canada, and much needed improvements to the Detroit Public Transit System. Do you actually care about your constituents? Do you want to make the people of Detroit wait just so you can put a feather in your cap? This is what people tend to despise about politicians. With all due respect Mrs. Whitmer, this is not about YOU.

It is about your people and in poll after poll the people of Michigan have supported Right to Work legislation. That would qualify you as our second “honorary”ass clown. If people outside of your own state even knew who you were, you’d be in a dead heat for the top spot. Either way you can only be an “honorary” ass clown because if you look at the definition it is a title normally applied to males. Sorry Mrs. Whitmer, you are not man enough to be a full-blooded thugalo.

I mean no disrespect to President Barack Obama, but he ranks third on this list. He may be the biggest ass clown in our country at times, but not in the Michigan Right to Work debate. Unfortunately Obama did make some remarks before his trip to Michigan, but fortunately most of the people that follow his words can not read, so I will cut him some slack. Ooooh…that was bad. I might hear about that one. Mr. Obama, with all due respect… Why in the hell do you have any right butting into state business? 23 other states have made this choice and suddenly Michigan draws your interest??? Could it be that your political party gets contributions from labor unions and you don’t want to upset Hoffa? Are you like his bitch or something?

Oh, I was out of line for saying that. I sincerely doubt that labor unions would put tens or maybe even hundreds of millions of dollars into democratic campaign funds. That’s just conspiracy thinking. I’m still making you a thugalo on principle alone. I’m sure something is amiss here, I just can’t put my finger on it. People are not stupid Mr. Obama. Unfortunately I am not a smart man. I can’t figure out what you are up to but I’m sure everyone else sees it.

Damn I wish I had some cool pics with all of them wearing their thugalo war paint.  I could sell some rockin’ t-shirts. Oh, my bad, I forgot that we are not longer capitalists in this country. I need to start thinking more like a socialist.

Unlike the real ICP (Insane Clown Posse), which is not to be confused with the ACP (Ass Clown Posse), I doubt the thugalos will develop a cult following that transcends decades. They are popular with thugalo-nation now but it won’t last with the impending crushing defeat. A thugalo hates to lose. It’s hard to be a bully when you keep getting bitch-slapped.

Thugalo-nation did tear down a tent in Lansing, Michigan today. It was reported that some members of the mob were carrying knives. Evidently the tent that was the ripped down was filled with conservatives, and some of them were still in it. That’s classy.

This is exactly why ass clowns can never prevail in our society. If that tent was full of conservatives, then the thugalos were stupid enough to bring knives to a gun fight. Everyone knows that conservatives are notorious NRA supporters. Where is Charlton Hesston when you need him?

Maybe the members of the Ass Clown Posse need to start thinking before they speak. Talking about Civil Wars, withholding funds, and trying to put your federal clown nose into state business is not helping anyone. It’s just increasing hostilities. Shame on all three of you.

Society will someday change its “collective underwear” and the skid marks will be thrown out with the Thursday morning trash. Until then I would suggest you start thinking about the people in Michigan. The majority wants Right to Work legislation and that is what they deserve. Regardless of how stupid my ramblings may sound, this is what really matters. What do the people of Michigan want? They want the Right to Work without paying union dues.