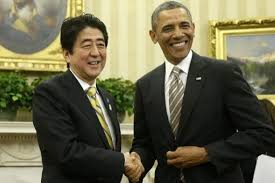 Did Obama and Abe talk about these things Friday? I am certain they did. But there are two things that will get far less press that were also discussed and could be decidedly more important.

Prime Minister Shinzo Abe carries a reputation much like our own President of trying to devalue his country’s currency:

“Currency Manipulation: The Japanese economy, the third-largest in the world, has been ailing for years. Other countries accuse Japan of seeking to devalue its currency to try to boost exports. The weakening yen has dropped 14 percent since November, according to Bloomberg. Analysts fear that if Japan continues to devalue its currency, other nations will follow suit. White House officials on Thursday would not say whether Obama and Abe would discuss this issue in their meeting on Friday.” Source: http://www.nationaljournal.com/whitehouse/mr-abe-goes-to-washington-japan-pm-talks-autos-north-korea-with-president-obama-20130222

Why is this important? Well you have to look at the second part of the equation. Obama has picked up where G.W. Bush left off with  policies to deliberately destroy the value of the dollar. We can either believe that both men were/are that stupid or we can give credit where credit is due and say that it must be deliberate. It is my belief that it was deliberate with Bush and is also purposeful with Obama.

There are many theories surrounding purposely weakening a national currency, but here are a few of the more popular theories: 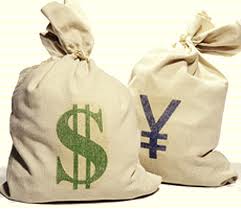 The important note of all three strategies is that the people suffer. Less value means less buying power for the citizens. While politicians play games with their country’s currency it means grave consequences for the people of their nation that slip further down the economic slope and deeper into poverty. My guess is that the two leaders compared notes. But as it would be ultimately unfair to judge Obama as a man who would do this to his own countrymen, let’s further explore who the man claims to be. After all, Obama is the president who is hell-bent on punishing the top 1% of this country’s wealth. It must be that way, because he said it was so.

Yet again here is a lesson in what is really going on. The Democrats and Republicans both play fictional roles in Washington D.C.  Democrats are not automatically for the poor anymore than Republicans are automatically for the wealthy. The truth is that both parties are for the EXTREMELY wealthy and it is all political posturing. They are also part of the same party in the eyes of many. Just look at what the Friday Meeting was really about, and watch the complete complicity shown by our lawmakers. Many of them know exactly what is going on and they are banking on you and I not being able to figure it out. After all, who is going to tell us? The Mainstream Media? LOL

So let’s take an obvious attempt at further weakening the dollar on the most benign of all premises…that Obama is trying to stimulate trade. This sets up for one of the most crucial of all topics that Obama and Abe discussed late last week…Japan’s entry into the TPP Trade agreement. To find the real story you have to avoid the mainstream media (a.k.a. state run propaganda) and go straight to the source. To see what a meeting is really about, I always thought it was prudent to look at the meeting through the eyes of the person paying for the gas. Abe came here, so I will trust the recounting of his agenda more than what I hear in the MSM. This is a direct quote from The Japan Times in an article entitled “Abe-Obama talks set stage for TPP entry.”

“Japan will not have to vow to remove all trade tariffs if it joins the Trans-Pacific Partnership trade initiative, Prime Minister Shinzo Abe and U.S. President Barack Obama confirmed Friday, setting the stage for the country’s early entry into the ongoing talks.

During their summit talks, the two leaders said they also agreed to enhance security cooperation in Asia in response to North Korea’s nuclear threats and China’s mounting military assertiveness, which has escalated territorial disputes throughout the strategically critical region.

It was their first White House meeting since Abe and his Liberal Democratic Party administration took office in late December.

‘The two governments confirm that should Japan participate in the TPP negotiations, all goods would be subject to negotiation,’ Obama and Abe said in a joint statement, adding, ‘As the final outcome will be determined during the negotiations, (Japan) is not required to make a prior commitment to unilaterally eliminate all tariffs upon joining the TPP (discussions).’” Source: http://www.japantimes.co.jp/news/2013/02/23/national/abe-obama-talks-set-stage-for-tpp-entry/#at_pco=cfd-1.0

For those who do not know what TPP is, so far this sounds like a

mutually beneficial arrangement being talked about between the U.S. and Japan. But upon further exploration you will find that The TPP is anything but another trade agreement. It is dangerous and very controversial.

TPP is an acronym for The Trans-Pacific Partnership. Corporations connected to this proposal like Wal-Mart, Philip Morris, Exxon Mobil, Microsoft, Cargill, Nike and Pfizer have done an outstanding job of keeping the exact nature of the agreement out of the public eye, but alternative media sources have caught on.

“The TPP is called a ‘trade agreement,’ but in actuality it is a long-dreamed-of template for implementing a binding system of global corporate governance as bold as anything the world’s wealthiest elite has attempted before. Of the 26 chapters under negotiation, only a few have to do directly with trade. The other chapters enshrine new rights and privileges for major corporations while weakening the power of nation states to oppose them. The TPP essentially proposes to establish a parallel system of justice where companies can sue countries in a tribunal of judges composed of unaccountable international trade lawyers with little to no process for appeal.

This wild bastardization of the concept of justice endangers everything from affordable medicines, internet freedoms and intellectual property rights to democratically enacted labor laws and environmental protections. And that’s not to mention the massive outsourcing of middle class jobs from the US to countries like Vietnam and Brunei.

This isn’t just a bad trade agreement, it’s a wish list of the 1%—a worldwide corporate power grab of enormous proportions.” Source: http://www.alternet.org/environment/what-you-need-know-about-worldwide-corporate-power-grab-enormous-proportions?paging=off

This article also states, “While 600 corporate lobbyists have been granted access and input on the draft texts from the beginning, even high-ranking members of Congress have been denied access to the most basic content of what US negotiators are proposing in our names.”

OK now, let’s have a show of hands… How many people are really surprised that Obama is negotiating deals that have not been available for review by our lawmakers?

But, beyond that simple fact… Why are our lawmakers not demanding answers? My best guess is many already know and are complicit. Our government is more corrupt than most people tend to imagine. They know where this is headed, even if they don’t know all the details.

Even though the agreements have been kept very secretive, there has been a leaked “Investment Chapter” that has drawn stern criticism from across the globe.

“It confirms that National has agreed to let foreign investors like Philip Morris, Pfizer, Warners, Exxon Mobil or Microsoft sue New Zealand for damages in private offshore tribunals, claiming that new laws or policies breach their rights under the agreement.

‘My preliminary analysis confirms the concerns raised by lawyers in a recent letter calling for the exclusion of investor’s rights to sue, and much more,’ Professor Kelsey said.

‘Philip Morris confirmed on the weekend it will use so-called free trade treaties to challenge our smoke free laws. At present, it would need to find a backdoor way to use an existing agreement. This TPP text would throw open the front door to them and all the other US firms that want to block new laws they don’t like.’” Source: http://www.scoop.co.nz/stories/PO1206/S00186/national-says-yes-to-investor-rights-to-sue.htm

We are getting into some seriously murky waters here when International Corporations start having the ability to govern the very countries that grant them the right to commerce. Theses companies will be given “favored” status over domestic companies and will have more rights than the very citizens of these countries.

They will effectively have the right to dictate to and sue a national government with no possibility of consequence. They will literally have the power to make public policy all over the world. Corporations will have power over governments. In the real world it works this way already, but never has it been this blatantly obvious.

What does all of this sound like to you? To me it sounds like a breeding ground for The New World Order. Mr. Abe is very aware of the controversy behind this trade agreement. He didn’t come to America to agree to criticize North Korean nuclear proliferation. That’s a no-brainer my friends. Obama and Abe could have handled that with a phone call.

No, he came to America for much more than that. Weakened dollars…weakened yens…more trade possibilities…and laying out the carpet for one world government.

World leaders will stop at nothing to make sure their agendas are advanced and accomplished. When Japan’s top “liberal progressive” visits America’s top “liberal progressive” it’s not about scolding North Korea for firing a few test shots. It is more likely about shared strategies for accomplishing the real goals of both administrations. This is the change that both countries voted for.

You should be thinking about demanding answers from your congressional representatives. The TPP is about giving power to the 1%. They have been making payments to this end goal for a long time, in the form of kickbacks and campaign contributions. Now the 1% is getting exactly what they want.

We can not allow Obama to keep wielding his power in this manner. Make no mistake, Obama is not about punishing the 1%.

He is their puppet.