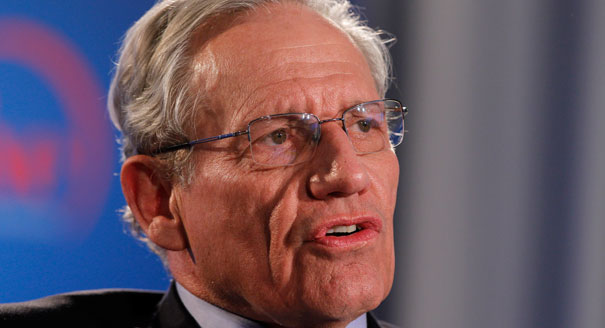 In his formative years as a young investigative journalist for The Washington Post, Bob Woodward was one half of the journalistic duo of Woodward & Bernstein, who brought down a Presidency when the 2 reporters were initially assigned to report on the June 17, 1972 burglary of the headquarters of the Democratic National Committee in a Washington, D.C., office building called Watergate. In subsequent coverage of what came to be known as Nixon’s ‘Watergate Scandal‘, Woodward & Bernstein revealed through a ‘secret‘ informant referred to only as Deep Throat in their later book about their experience covering the scandal titled, ‘All The President’s men‘, the various “dirty tricks” used by the Nixon re-election committee during his campaign for reelection. Their coverage resulted in several governmental investigations which culminated ultimately in the eventual resignation of Richard Nixon in August, 1974 as he faced the developing reality of Impeachment for his role in the criminal cover-up of the break-in.

Woodward’s career contributions & awards for his works since Watergate are both extensive & prestigious as cited in this excerpt from Wikipedia:

~”Woodward made crucial contributions to two Pulitzer Prizes won by The Washington Post. First he and Bernstein were the lead reporters on Watergate and the Post won the Pulitzer Prize for Public Service in 1973.[5]

Woodward also was the main reporter for the Post’s coverage of the September 11 attacks in 2001. Ten stories won the 2002 Pulitzer Prize for National Reporting[6] – “six carrying the familiar byline of Bob Woodward,” noted the New York Times article announcing the awards.[7]

He has been a recipient of nearly every other major American journalism award, including the Heywood Broun award (1972), Worth Bingham Prize for Investigative Reporting (1972 and 1986), Sigma Delta Chi Award (1973), George Polk Award (1972), William Allen White Medal (2000), and the Gerald R. Ford Prize for Reporting on the Presidency (2002). In 2012, Colby College presented Woodward with the Elijah Parish Lovejoy Award for courageous journalism as well as an honorary doctorate.”~

“Unlike Barack Hussein Obama, Woodward earned his awards for his achievements”

Now -nearly 39 years later- Woodward finds himself again at odds with another American President; Barack Hussein Obama. In a recent Washington Post op-ed of February 22, titled, ‘Obama’s sequester deal-changer’, Woodward goes on to assert the following details attributing whom it is who’s actually culpable for the current sequestration apocalypse being touted by Obama & subordinate Democrats in their shameless campaign of fear mongering upon the American people:

~”Misunderstanding, misstatements and all the classic contortions of partisan message management surround the sequester, the term for the $85 billion in ugly and largely irrational federal spending cuts set by law to begin Friday.

What is the non-budget wonk to make of this? Who is responsible? What really happened?

The White House chief of staff at the time, Jack Lew, who had been budget director during the negotiations that set up the sequester in 2011, backed up the president two days later.

“There was an insistence on the part of Republicans in Congress for there to be some automatic trigger,” Lew said while campaigning in Florida. It “was very much rooted in the Republican congressional insistence that there be an automatic measure.”

The president and Lew had this wrong. My extensive reporting for my book “The Price of Politics” shows that the automatic spending cuts were initiated by the White House and were the brainchild of Lew and White House congressional relations chief Rob Nabors — probably the foremost experts on budget issues in the senior ranks of the federal government.

Obama personally approved of the plan for Lew and Nabors to propose the sequester to Senate Majority Leader Harry Reid (D-Nev.). They did so at 2:30 p.m. July 27, 2011, according to interviews with two senior White House aides who were directly involved.”~

Now in the fallout of Woodward’s op-ed, the junk yard dogs of the Obama White House have been unleashed as press secretary Jay Carney has remarked Woodward’s claim as being “willfully wrong“, while White House director of progressive media and online response, Jesse Lee also took exception with Woodward’s assertion tweeting,

“Obama, signing BCA: ‘This is, however, just the first step…you can’t close the deficit with just spending cuts,'” Lee tweeted. “‘…It also means reforming our tax code so that the wealthiest Americans and biggest corporations pay their fair share.'”

I don’t know, but all I hear in that is just more Socialist jargon. More regard for a premise that is an inherent antithesis to the founding principles of our Republic! Naturally too, the loyal rank & file Uruk-hai in Obama’s liberal media clamor over each other in consolidated defense of their master, but that’s rote & nothing that isn’t to be unanticipated.

Notice when it comes to Barack Hussein Obama being held accountable for his lies how Democrat’s & liberal’s suddenly marginalize the issue of blame as it conveniently becomes irrelevant over the more pressing concern of both Parties needing to work together to resolve the looming sequestration catastrophe? Much like other occasions in the past when their own narratives of hate mongering incited public hostility to the point that when the backlash threatened to reach around & bite them in their own posteriors, suddenly they were calling on the need for more civil discourse. Yes. Their hypocrisy is that sickening! These people are criminally negligent & treasonous! If we still lived in a sane world, these co-conspirators of Obama’s propaganda in the drive-by media would be forcibly removed, indicted, & prosecuted for their betrayals against the American people!

What’s even more infuriating about Obama’s apocalyptic sequestration narrative of obscene lies which he has willfully addressed to the American people, is the fact that it’s nothing more than a complex political strategy to aid Democrats in trying to recapture the House in 2014 & return the psychotic Nancy Pelosi to her former position as Speaker of the House! Make no mistake! That is the ulterior motive & long term goal behind this repugnant fiasco! You don’t need to see every mile marker & read every road sign to know exactly where this road is going. You only need to understand & appreciate the extent of the moral vacuum these people operate in & the absence of any ethical standards they’ll resort to when it comes to dealing with obstacles that stand in the way of their pursuing & achieving power!

Truth is the new hate speech in Obama’s America. What more or better can you expect from a proven pathological liar?! Yet whose word are you’re going to take on the issue of culpability in this sequestration debate? Would you trust the word of a venerable celebrated journalist known for a lifetime of meritorious career achievement or the word of a community agitator who has done nothing to earn his status & is known more for a trail of dead Americans left in his wake?

Of the 2 I know which one it is who I believe. Here’s a little hint: It’s not Obama!