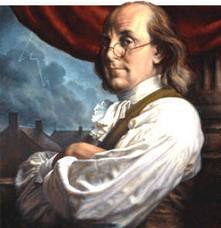 “Yes, we must, indeed, all hang together, or most assuredly we shall all hang separately.” (Benjamin Franklin, 1776)

Are you a Patriot or a Loyalist? One part of history which always intrigued me is the War of Independence. For much of my life, I never fully contemplated what must have been a seemingly impossible objective. We were taught that a group of folks banded together, sent of a letter to the King, fought a war, they won, and America was born! Well, okay, we were taught much more than that.

Undoubtedly, folks back then were much like us. No, they didn’t have the internet, air-conditioning, or McDonald’s. But they dealt with some of the troubles that come in life; couples argued, bills had to be paid, children needing care of, and all manner of life’s routine. And if they are indeed like us, more than a few probably just wanted to live their lives unfettered by the commotion caused by a few fire-brands. Likely they just wanted to earn a living, pay their taxes (however high they were), and be left alone.

To our benefit, enough thought life had much more to offer than the inequitable treatment received from a distant King. As the concept of independence grew, many people began taking sides. But, the surely were many that needed convincing before openly aligning themselves. After all, the notion of rebellion, let alone independence, was treason; a crime every government has dealt with harshly.

A crystallizing moment on the trail to independence occurred in a skirmish between the British and the Patriots…the Shot Heard ‘Round the World. It was this conflict that firmed the resolve of many, perhaps cementing only one course of action. But before open conflict began there must have been disharmony among the people. Even as the Patriots ranks grew, there were still people loyal to the Crown. These Loyalists believed the Colonies rightfully belonged under British control. From a Loyalist point of view, this was a civil war, not unlike how we view the Civil War in the 1860s. And the two wars are not dissimilar, citizens openly rebelled against what they felt was an intolerable Government.

The Colonists did not merely wake up one day and decide to emancipate the Colonies by sending the Declaration of Independence. The road to war was long and winding, with many perceived injustices along the way. And many attempts were made to avert conflict and find a peaceful solution to resolve the plight felt by many.

For us today, these events are almost abstract. Viewing through the lens of history, we know the events as they occurred, and we know how that story ended. But for the people involved, many must have felt much uncertainty, or perhaps an almost improbable future; just as you might feel if something similar happened today.

Looking at America today, there are many issues that divide us as a nation. As important as the Constitution is, it is still just a piece of paper upon which some people set out the ideas that would form a nation; logically, no more or less important than any other writings. The value of the Constitution is the bond these ideas have in the hearts of those who believe them important enough to defend. If our Government sets aside the principles of the Constitution, we must either accept new ideas or struggle to return to the former.

Obama’s campaigns in 2008 and 2012 used two words as slogans to embody their ideas for America: Change and Forward. This group has long promoted a different vision for America, which in nearly all instances involves increasing the size of Government. Others in our population, like the Tea Party, encourage smaller Government based on the original tenets of the Constitution. I believe that our Government should maintain the smallest possible footprint while the Constitution should adapt to accommodate the needs of a contemporary society. All this must be done while strictly adhering to the basic principles upon which it was built.

The original Constitution was in no way perfect; in fact there were parts that are very disturbing to our modern way of thinking. Though the Declaration of Independence declared “all men are created equal,” our Constitution did not make reflect that sentiment. Though it took far too long and far too many travesties, these deplorable wrongs were rectified. We cannot change the past, but I believe the fundamental philosophy of the Constitution is a rock upon which this country must remain grounded.

If there is a premise that we have deviated from these basic principles, you must first ask how so and what is the proof? I believe there are laws and policies that directly violate the Constitution. Though not an exhaustive list, these things that follow concern me greatly. I would hope that you also share that concern or else we may not remain “the land of the free.” The best course of action is vigilant maintenance, not waiting to fix the problem once it is broken.

To keep this article from becoming a book, I ask that you research the links provided and ask yourself if these laws and policies comport to the principles of the Constitution.

Speech: If you considered going to the White House, standing out front and voicing your opposition to Obama and his policies, you are likely violating 18 USC 1752. Here is a video of this law in action. As you can see, the protesters have peaceably assembled to address their grievances. How do you consider a sit-in “disorderly and disruptive conduct?” I may not agree with their cause, but I support their right to peacefully assemble and speak (or don’t speak) their minds.

Religion: A congregation should be free to find guidance on all matters of life, including politics as it relates to their faith. Let suppose a church opposes a candidate because his/her stance on abortion. That church would lose their tax-exempt status under 26 USC 501(c)(3), which “grants” this status. (I won’t get into the morass of taxation) And if that code is sufficiently baffling, the IRS spells it out quite definitively that churches are “absolutely prohibited” from showing support/opposition to candidates or legislation. Churches that oppose Obamacare and its mandates could find themselves shelling out tithes and donations in order to pay taxes and fines to the Government that forces them to violate the tenets of their faith. In realistic terms this is a punitive law that puts religion under the oppressive weight Government.

Arms: There are those who refuse to obey the laws that make society civil and peaceful. Necessarily these people will have some of their Constitutional rights suspended or revoked. However, reasonable people understand that no amount of legislation will stop a determined person from their desire to harm others. Federal law makes it illegal to transfer, ship, transport, receive, or possess a firearm for certain prohibited people. In the wake of recent mass-shootings, Senator Diane Feinstein (D-CA) wants to ban particular kinds of weapons and limit magazine capacities. Contrary to statistics and common sense, lawmakers like this would have you believe regulations will make you safer. In reality, they are violating the Constitution and stripping you of your ability to defend yourself from those who mean you harm.

Arrest/Seizure/Due Process: In 2010 the U.S. Army released a procedure for Internment and Relocation during war or civil disturbance. Chapter 2, Section 2-40 describes how this procedure is applicable within the United States. Though the military is not strictly prohibited from operating within the U.S., posse comitatus applies. Imagine you and your friends are classified “terrorists” as defined by DHS (see below). Is it possible that you could be Gitmo’d if you were involved in a civil disturbance like the people who had a sit-in outside the White House? Definitely an extreme interpretation, but it is technically possible.

Property Rights/Seizure/Due Process: During times of war, Presidents have taken actions to gather resources necessary for its efforts. Those executive orders take control of national transportation, communications, all forms of energy, and even labor to name a few. Whether there is a legal basis for these Executive Orders during wartime is a matter probably best debated by the Supreme Court. Where I take exception is the shift to allow such measures during peacetime. Presidential action suspending the Fourth Amendment and other rights where there is no exigent circumstances exist is despotism.

The Thirteenth and Fourteenth Amendments:

Slavery/Equal Protection: Executive Orders did not stop at federalizing everything in America. Under this act, the workforce of America could be drafted under Selective Service and forced into various labor positions for “national defense.” Selective Service is mandatory (aka involuntary) for all males between 18 and 25. Now imagine a draft where young men are forced into labor. In case the Thirteen Amendment slipped the mind, “neither slavery nor involuntary servitude…shall exist in the United States.” Visions of the U.S.S.R.’s Gulag system come to mind. And let’s not for get the Equal Protection clause in the Fourteenth Amendment and the fact that this portion of the Executive Order would only affect young men.

The Department of Homeland Security START program has now classified patriots as terrorists, enemies of the State. This program was developed to identify terrorism hot-spots and groups. Among the groups is “right-wing extremists.” Now, there truly are some groups whose notions of conservatism are way off the charts, the Oklahoma City confirms that. Equally there are other groups throughout the political spectrum whose actions qualify them as terrorists. But the report’s definition of “right-wing extremist” would probably include most people who have a patriotic attitude toward America. Among the “terrorist” qualities include, sense of nationalism, belief that there is an attack on our way of life, disagreeing with the Liberal world-view agenda, defense preparations, and the most radical of all believing in individual liberties.

I am not saying all these abuses of power will definitely result in an inevitable open conflict. Nor am I fomenting people to violence. However, I am stating that these policies directly contradict the powers afforded the Government by the Constitution. The Constitution was meant to be a governing document that could be modified to meet the needs of future generations. But the main principles were to be the guide in those alterations.

Whatever your beliefs about our Government, measures such as these violate the clear edicts of the Constitution. The Constitution’s intent was to prevent tyrannical rule and left safeguards for the American people to wrest control should the Government attempt to usurp their power. Little by little our Government has moved toward authoritarianism by enacting laws and policies to take away your freedom, your rights, and your property.

Our continued success as a nation rests upon a return to those founding principles. The ones that assure “We The People” are masters of our present and future prosperity. The articles listed above are just a small fraction of our Government usurping the power from The People. I believe our nation stands at a precipice and no one knows for sure what will come. However, am certain there are a lot of people that demand America return to a Government tethered to the Constitution. The spirit that moved the Colonists to action runs deep through all of us, the Government must take care not to provoke the ire of that American spirit or we may see the most unfortunate events unfold.

So I ask again, are you a Patriot or Loyalist?

One Amendment to Protect Them All Unisex Hoodie

Pedo Paradise: UK Pedophiles are Buying Gambian Children for $2.60 for...

Indictments Coming? Obama & Hillary Look Like They Are Finally Going...