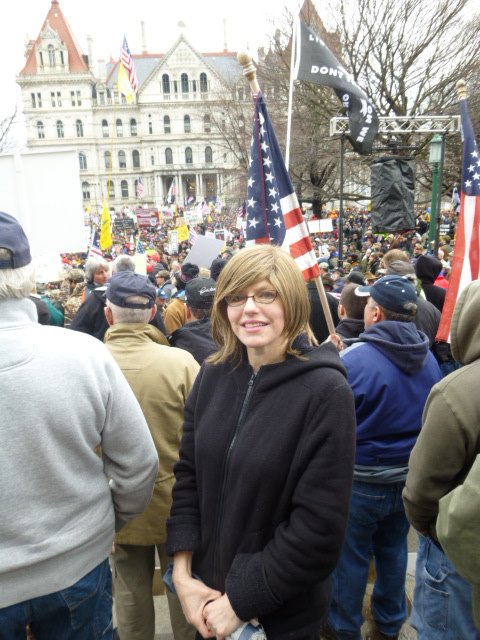 This is the face of an American Patriot, my friend Devorah Tehilla. Today Devorah was one of an estimated 12,000 Patriots who gathered in Albany, New York to support the 2nd Amendment and voice their opposition to New York’s “SAFE Act.” She was gracious enough to share her pictures with The D.C. Clothesline. It is unclear what kind of coverage we will see in the Mainstream Media, so let’s look at this day through the eyes of someone who was there. Thank You so much my friend. You are the epitome of a Patriotic American and I am proud to stand with you.

“When only cops have guns, it’s called a ‘police state’.” – Claire Wolfe

“The best we can hope for concerning the people at large is that they be properly armed.”- Alexander Hamilton

“Men trained in arms from their infancy, and animated by the love of liberty, will afford neither a cheap or easy conquest.” – From the Declaration of the Continental Congress

“To disarm the people… was the best and most effectual way to enslave them.” – George Mason

“That the said Constitution shall never be construed to authorize Congress to infringe the just liberty of the press or the rights of conscience; or to prevent the people of the United states who are peaceable citizens from keeping their own arms…” – Samuel Adams

“Every Communist must grasp the truth, ‘Political power grows out of the barrel of a gun.'” – Mao Tse-tung

“Americans have the will to resist because you have weapons. If you don’t have a gun, freedom of speech has no power.” – Yoshimi Ishikawa

“You know why there’s a Second Amendment? In case the government fails to follow the first one.” – Rush Limbaugh

“The world is filled with violence. Because criminals carry guns, we decent law-abiding citizens should also have guns. Otherwise they will win and the decent people will lose.” – James Earl Jones

“Where rights secured by the Constitution are involved, there can be no rule making or legislation which would abrogate them.” – Miranda vs. Arizona

“Both oligarch and tyrant mistrust the people, and therefore deprive them of arms.” -Aristotle

“The strongest reason for the people to retain the right to keep and bear arms is, as a last resort, to protect themselves against tyranny in government.” -Thomas Jefferson

“I have a very strict gun control policy: if there’s a gun around, I want to be in control of it.” – Clint Eastwood

“The Second Amendment of our Bill of Rights is my Concealed Weapons Permit, period.” – Ted Nugent

“A free people ought to be armed.” -George Washington

People of New York we applaud you. Today millions of Americans stood with you. Thank You again Devorah for allowing us to see this historic day through your eyes.

Our 2nd Amendment protected rights are not negotiable. We shall never bow to the rule of tyrants and we will never disarm.