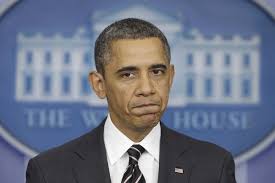 Barack Obama has had evolving positions on the issue of sequester; first he came up with the idea of these automatic spending cuts and threatened to veto the Congress’ attempt to over-ride the spending cuts in an effort to portray himself as a fiscally responsible expense cutter.

But that was before the election. After the election Barack Obama’s position evolved when he thought he saw an opportunity to break the backs of the Republicans in the House. Suddenly he saw sequester as something that would destroy the economy he had worked so hard to save and began a fear mongering propaganda campaign to frighten the American people while at the same time trying to lay the blame at the feet of the Republicans.

For the last two weeks Barack Obama has been bemoaning the impending doom of sequestration: We have heard everything from Social Security and welfare being cut, 800,ooo layoffs at the Pentagon if sequestration is allowed to happen, air traffic controllers and first responders being laid off, as well as people starving on the streets, border security being cut and an increased risk at a terrorist attack at home all because there is a scheduled 2% cut to the rate of  increase in the federal government.

Below is a montage of some of Barack Obama’s sequester propaganda:

Notice he said “immediate, painful spending cuts” during this montage because he was trying to scare people into supporting a repeal of sequester and trying to intimidate the Republicans into caving to him once again.

But a funny thing happened on the way to sequester; Barack Obama over played his hand and instead of scaring the American people they are beginning to question the veracity of his statements and for once the Republicans (at least at the time of this writing) have held firm and are not caving in under the weight of the propaganda war being waged against them.

This has left Barack Obama in a bind because he is not used to the Republican party showing a backbone for once and he realizes that the American people are going to wake up tomorrow with sequester in place and life will go on as planned–nothing will have changed–so he has been forced to walk back his fear mongering campaign. His position has evolved again:

That statement, of course, is in direct contrast to his assertion that the American people will feel “immediate, painful spending cuts” is it not?  Suddenly he is forced to walk back his rhetoric and make the claim that it might take awhile before people realize anything has happened. Do we need any more  proof that Barack Obama hasn’t been exactly honest with the American people over the last two weeks?