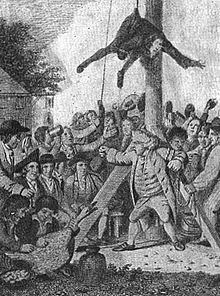 Ramblings from the Peasantry: John Tory, Charisma and You.

Yes folks I have a bunch of rants still banging around this old skull of mine, but tonight I am off in a different dangerous comparison. And some history…..which more often then not, gets repeated by those who do not recall it. So… I’ll just jump right in. Who was John Tory?

Good question… John Tory was not a real person, but instead he was many. He was every man or woman who supported the King, during the last revolution. John Tory believed what he was doing was right by supporting the regime. John Tory went as far as actually taking up arms against the rebels and formed his own militias to make war on the Rebels. But poor misguided Johnny, no matter his lot, stood by his King with unwavering Loyalty.

Why you ask when clearly he and his kinfolk were wrong in our eyes? Well for the same reason the Ozombies cannot see our point of view as well. They firmly believe in their “King” as well, no amount of arguing, persuasion, or reason will make the see another side of the coin. They see what the “King” tells them! Which brings me to more of the story. Once as a young teen, maybe 13 or so, my mom, after seeing my private library, asked me, “Why the hell do you have so many books on Hitler and the third Reich? Do you know how evil that man was and what he did?” (Mom was one of the “Greatest Generation” and had seen the war as a child.) My answer to here was, “Mom, I am reading these books to see just how an ugly, horrible little man, took over a nation, and destroyed most of the world as we knew it.”

My friends I did discover things about that man. Hitler was an ugly 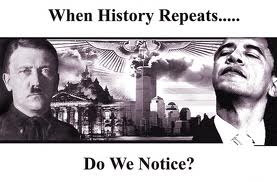 little horrible man from a very strange, broken family. His background is a shady affair all the way around. He was born in a small town in Austria, and lived most his early years there. He joined the Army, and was a decent soldier, but his comrades called him ‘eccentric.’ One thing this strange little man had was an uncanny Charisma! The ability to woo others into doing his will. The National Socialist party (The Aryan Grandfather of Communism) was in its infancy when Hitler wrangled his way into it and soon ruled it. He did a stint in jail for his beliefs, but that only inspired him to write. (Mein Kampf aka My Struggles) But this effeminate voiced man also sat down and learned the art of speaking, increasing the Charismatic abilities of this ugly little man. Now when he spoke to crowds, he used very expressive hand gestures. (Theatrical training) He used the pregnant pause (Voice acting) to devastating effect. He used all manner of voice inflections. And this ugly little man soon used his influence to Woo a nation. (Germany)

His actions added to his Charisma as well, as he took a nation that was soundly defeated in the “War to End All Wars,” from a broken economy, to a thriving, industrial nation. People there were working and times were good. The leader now was attaining a godlike status and everyone loved the leader! The useless German Mark, now was dragged from inflation, where once it took billions of Marks for a loaf of bread, to a point it had international buying status. People where happy living under the Nazi mantle. 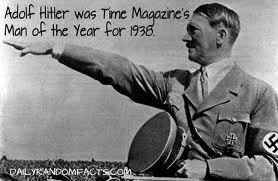 Then the Mantle was lifted, Hitler used his Charisma and abilities on the international stage, after all it worked at home. Why not the world as well? He demanded, and outright took, lands claimed by Germany and lost in the last war. He got them! His Charisma was boundless. It worked everywhere he displayed it. He was now being admired all over the world! After all, didn’t the American magazine ‘Time’ make him ‘Man of the year?’

Then as the mantle shifted more… his people began to see the ugliness.  Folks began to disappear, especially the undesirables. (Mental handicapped, Gypsies, criminals) Gun control came into being and guns were outright taken if not surrendered. And one night in 1938, outright assaults on Jewish businesses began. Still  a mass majority STILL believed in their leader. And on the world stage, Hitler began to ignore the conditions of the treaties of the lost war. His army grew past the restricted 100,000 man limit. He lied to the world while building restricted ships, tanks and planes. He organized a paramilitary ‘work corps’ ( a training to basically indoctrinate teens into an army type life) and put millions of young boys into the “Hitler Youth” to be indoctrinated into military life and National Socialism.

Thousands were taken into service in the SS and Gestapo. The Wonderful utopia that Hitler had created earlier had taken a very sinister turn. If one was to speak out against the ruling class, the Government, or it’s policies, one was soon visited by a couple of leather coated, snap brim hatted men, and one thence disappeared. After all one could not criticize a God. Even when the war, which by the way was the ultimate ends to what this ugly little man wanted, John Tory made his appearance again and many of the masses still believed, despite being shown the horrible truths of the ugly, little man. Uncounted Millions died. The Charismatic leader ended his own existence lamenting how the Germans had failed him!!!!!

Now, after that short little lesson in history condensed….we find ourselves in the powers of Another ugly, little man. This man DID take some lessons from history. He was quick to learn the power of Charisma, and how to sway a nation and use it totally. He learned how to make the masses into John Tories, and keep them faithful to him. His play book, pretty much play by-play, echoes the other ugly little man. Except this man has discovered wealth among his people is not the way, keep them dependent.

This man has admitted current rules (ie US Constitution) have created stumbling blocks for his agenda. This man currently has his own SS and Gestapo in place, heartless John Tories who would kill their own mother if ordered to do so. This man is organizing the youth of this nation. This man now controls every SINGLE aspect of you’re life though excessive and possibly illegal ‘Executive Orders.’ This man is waging illegal wars, (Hmmm Somewhat like the Spanish Civil war?) covert operations  and behind the scene support, to those we have deemed an enemy. This man may not even be a Natural citizen of this land, and may have usurped the Office he holds (Hey wait a minute! Wasn’t Hitler from Austria? And he ruled Germany?? I thought so!)

And this man’s uncanny charisma has his own crowd of John Tories, from the Government all the way down to the common man. I don’t think this crowd of Tories will raise weapons against a rebellion, but they will damn sure blindly and foolishly block all who stand against their King, until magically that mantle is pulled away, and will some see the ugly little truths. And even then their King will scream, “Pay no attention to the Ugliness!!! I am your KING!!!” One thing our ugly little man did NOT learn in his teaching of Charisma and domination, one small thing that the OTHER ugly little man learned and payed for, that the will of free people wish to remain just that:  FREE PEOPLE.

And the part where YOU come in. If I, a basic no one with a passion for history, can notice some MAJOR parallels, then others will see them as well. I am no intellectual, I am just a concerned citizen who has watched this unfold and took notes. My aims are simple, to make John Tory , into John Disbelief  then John Angry, and finally into Sam Patriot. I may sway just ONE person  but it’s a start.  You need to wake up! You need to pay attention! YOU need to act! Dean is correct we need to push this as lawfully as we can and bring out the lawlessness of the current Administration. Only YOU, the patriot, can do that.

Think of how many of YOUR Family, in it’s history, have fought for this land. Some may have died in those wars, defending OUR home, our LAWS, our RIGHTS! Don’t let them down.  They gave it ALL for you! Time to pay back their sacrifices. Time to make the John Tories you know into Sam Patriots! Speak! The time is now! Let you Government Official KNOW you are displeased. Use YOUR rights while you can still Flex them! Think back to those brave shopkeepers and farmers standing on Lexington Green and in Concord. Think they were scared? Hell Yes! Think they KNEW what they were doing? Hell yes they did! They knew the risks and took them. So must we, we must be those brave men now. We must stand our ground, we have too much to lose….Simple as that.

Thank You Chuck for your thought provoking submission. Our goal at DCC is to be a voice of the people. If you would like your own opinions featured in The D.C. Clothesline, please send them to me at [email protected] -Dean Garrison