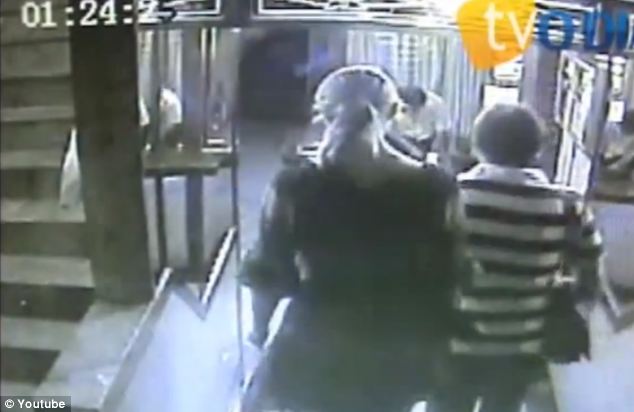 On February 20th, 2013 38-year-old Victoria Tcaciuc was found strangled to death in a hotel room in Brazil. She was a U.S. State Department contractor. No “government” foul play seems to be suspected or reported at this time. It is said that she was on vacation and seemed to be in the wrong place at the wrong time.

Though this story is quite possible, I found a tremendous need to find out who this woman was. I wanted to see if I could find the story behind the story. Though I didn’t find anything concrete what I did find is a very interesting story behind this woman’s life and professional career.

Tcaciuc was a native of Moldova. For those of you who are not familiar, Moldova is a small Eastern European country that is a former Soviet State. It is an independent democratic state in 2013 but remains one of the most financially challenged economies in Europe.

She was proficient in English, Russian and Romanian.

Early in her professional career she worked with two financial institutions in Moldova:

It appears she moved to the United States in or possibly before 2005. From 2005-2009 she worked with Regis & Associates. While at Regis & Associates she was Staff Accountant for the U.S. Broadcasting Board of Governors in Washington, D.C.

For anyone not familiar with Regis & Associates you can visit their “About” page here. They are an independent accounting firm that works with large federal government agencies. If you visit their site you should look at their huge list of government clients. The list is too long to list here but it includes the Navy, Social Security, Homeland Security, Department of State and the Securities and Exchange Commission. Regis & Associates is a very high-profile accounting firm that serves many government contracts.

Despite lack of American Citizenship this appears to be one of Victoria’s first jobs upon arrival to the United States. The account she was assigned to, The U.S. Broadcasting Board of Governors, is a little known branch of the federal government that has been scrutinized for lack of transparency in recent years. Wikipedia defines The BBG as:

“The Broadcasting Board of Governors (BBG) is an independent agency of the United States government responsible for all non-military, international broadcasting sponsored by the U.S government.” Source: http://en.wikipedia.org/wiki/Broadcasting_Board_of_Governors

In 2009 Victoria Tcaciuc became an American Citizen and also became a Program Analyst for The Federal Consulting Group. She worked with the “Performance Measurement and Satisfaction Line of Business.” In layman’s terms FCG is a company that measures the American people’s satisfaction with the federal government.

At some point in 2012 she had another upward career move. As quoted from Josh Rogin’s blog:

“Victoria Tcaciuc, age 38, had worked for the State Department for less than a year. She was a financial analyst working as a contractor for the comptroller of the Bureau of Consular Affairs in Washington, a State Department spokesman told The Cable.” Source: http://thecable.foreignpolicy.com/posts/2013/03/01/state_department_employee_murdered_in_brazil

OK so what is the Bureau of Consular Affairs?

“The Bureau of Consular Affairs is a bureau of the United States Department of State within that department’s management office. The mission of the Bureau is to administer laws, formulate regulations and implement policies relating to the broad range of consular services and immigration.” Source: http://en.wikipedia.org/wiki/Bureau_of_Consular_Affairs

The BCA is reponsible for things like issuing visas. The have had their own set of controversies over the last several years. I think the important note is that she was working for the comptroller. A comptroller is normally the federal government equivalent of the Chief Financial Officer in corporate America.

This young woman’s history is very interesting. There is no doubt that she was a very high-profile accountant. She came from Moldova and started working as a government contract employee before she was even an American citizen.

Does all of this point to foul play in her murder? Of course not. But it certainly is begging for someone with contacts and resources to dig a little deeper.

Was she really murdered by Alessandro Rufino Oliveira Carvalho? He had previously served 8 years in prison on an assault charge, so it is quite possible that she simply ran into the wrong man that night. Allegations are that she may have refused to have sex with him and he killed her. He was in the hotel room for less than one hour as is proven by hotel security cameras. He claims that she was alive when he left the room.

I think it is important to note that this is a 38-year-old divorced woman and she was holding Carvalho’s hand as they entered the hotel. I am not at all qualified to comment on the video. I am not an expert on the criminal mind but my thought would be that it was not about refusing sex. This is just my opinion but if Carvalho was the killer, I think his intent was to kill her before they even entered the room. If you would like to see the hotel surveillance video, click here.

We may never know the truth about this incident. I think the saddest statement of all is that we could have already received the truth and would never know it. When we can trust our government so little that we look for the conspiracies behind most breaking news events it signals that it is time for a change. We need more transparency from the federal government.

With the growing Benghazi controversy and the fact that the American people are still waiting to see the survivors, almost six months later, it is natural for us to question any untimely deaths that are suffered by Department of State employees or contractors.

I will make no accusations of government foul play without the facts to support such an idea. But I will, however, ask the questions that no one else seems to be asking.

Most of the biographical information I was able to gather on Victoria Tcaciuc can be found here. I guess my biggest question would be, if this was really just a tourist who found herself in the wrong place at the wrong time, why are all of the media sources so secretive about who this woman was? I searched hundreds of articles and I found 2 sources on the entire web that had any information about Victoria’s life.

Why did it take over a week for the death to make it to American Media Outlets?

Are they hiding something? Did Victoria Tcaciuc know something that put her in danger? Or is it just another poorly timed coincidence?