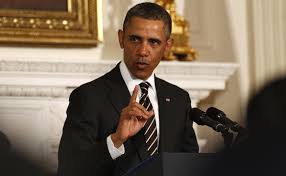 Instead of staying in Washington and trying to help broker a deal on sequestration Barack Obama instead decided to fly around the country and engage in a propaganda war in the hope that it would intimidate the Congress into striking a deal which would avoid the cuts he once proposed.

We heard stories of the hellfire and brimstone doomsday scenario of letting the sequester happen, yet this is all about priorities in spending. Surely a 2% cut in the rate of future spending can be absorbed without much harm inflicted on the American people, surely there is government waste which can be eliminated first.

At least one government agency, the Animal and Plant Health Inspection Service, thinks so and they sent a letter to the federal government asking if there was any wiggle room allowed in the cuts to make them less painful. The regime said no, and it is hard to believe this is limited to this one particular agency.

Here is the story:

The Obama administration denied an appeal for flexibility in lessening the sequester’s effects, with an email

this week appearing to show officials in Washington that because they already had promised the cuts would be devastating, they now have to follow through on that.

In the email sent Monday by Charles Brown, an official with the Animal and Plant Health Inspection Service office in Raleigh, N.C., Mr. Brown asked “if there was any latitude” in how to spread the sequester cuts across the region to lessen the impacts on fish inspections.

He said he was discouraged by officials in Washington, who gave him this reply: “We have gone on record with a notification to Congress and whoever else that ‘APHIS would eliminate assistance to producers in 24 states in managing wildlife damage to the aquaculture industry, unless they provide funding

to cover the costs.’ So it is our opinion that however you manage that reduction, you need to make sure you are not contradicting what we said the impact would be.”

So basically it looks as if the Obama regime has already decided what can be cut and what cannot be cut and if an agency has an idea that will lessen the impact of the sequester and the burden felt by the American people they are not interested in hearing it. These agencies are not allowed to “contradict what we said the impact would be” because Barack Obama wants his doomsday prophecy to come true and he doesn’t care who it will hurt as long as he thinks it will hurt the Republicans in the Congress and help the Democrats in 2014.

This would also explain why the Department of Homeland Security cannot afford to keep 2,000 illegal aliens in detention but can afford $50 million for new TSA uniforms, and it explains why we are being threatened with teacher layoffs while the Muslim Brotherhood in Syria is receiving $60 million in aid in Syria and $250 million in aid to Egypt.

As I wrote above, this is all about priorities and it is quite apparent where Barack Obama’s priorities are; his number one priority is not helping the American people but rather with spinning the sequester in an attempt to help himself and his party and it doesn’t matter how many people are hurt while he pushes this agenda. In fact he welcomes the pain because he feels it will lead to his own personal political gain.

Now we have an understanding as to why Barack Obama proposed the sequester in the first place only to reject it now, he has been planning this all along and once again he is one step ahead of the Congress.