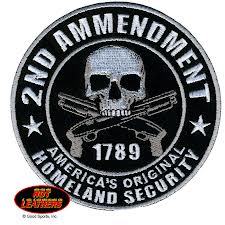 It seems to me that the simple use of a dictionary fully explains the God-given rights guaranteed under the Second Amendment of the Constitution of the United States.

A well regulated Militia being necessary to the security of a free State, the right of the people to keep and bear Arms, shall not be infringed.

A well (successful or effective) regulated (accurate and properly functioning) Militia(An army composed of ordinary citizens rather than professional soldiers) being necessary to the security (Freedom from risk or danger; safety) of a free ( Not imprisoned or enslaved; being at liberty. Not controlled by obligation or the will of another) State, (the condition or circumstances of a person or thing, a sovereign political power or community, the territory of such a community) the right (a freedom or power that is morally or legally due to a person) of the people to keep (To retain possession, have a supply of or maintain for use or service.) and bear (To carry from one place to another; transport.) Arms (weapons considered collectively. Any instrument or instrumentality used in fighting or hunting. The term (or) not being preceded by the word either means that both fighting and hunting are applicable, not either one or the other), shall not be infringed. (To transgress, violate, defeat, invalidate or encroach on someone or something;.

Therefore according to the definitions of the words as they were used should have meant the following.

A successful, effective, accurate and properly functioning army of ordinary citizens, being necessary to maintain the freedom of the people or the nation from anyone or any government trying to take away that freedom, the moral and legal freedom or power of the people to possess, have a supply of or carry or transport weapons or any instrument used in fighting or hunting, shall not be transgressed, violated, defeated, invalidated or encroached upon.

As far as I can tell by the definitions of the words used in the 2nd Amendment the Federal, State or Local Governments may not tell the people what type of weapons they may have, or how many weapons they may have, nor how or what weapons they may transport with them. Nor may they make any laws, regulations or bans concerning what weapons a person chooses to own or how and where they choose to transport them. In other words there are to be no infringements on this right whatsoever. If a person were to use those weapons in the commission of a crime then the governments may prosecute them according to law. However, maintaining our freedom is not only, not a crime, it is the duty of every American.

Thank You Jack for your wonderful contribution to DCC. If any of our readers would like to contribute to The D.C. Clothesline, please email me at [email protected] -Dean Garrison