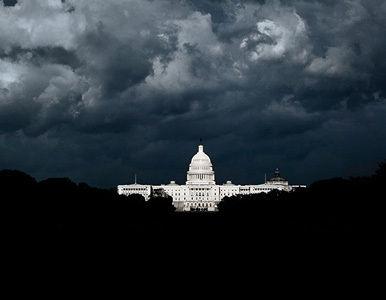 The dark cumulus of this asphyxiating Obama malaise hanging over our nation like a noxious blanket of pollution took on an even more ominous shade of black today as they condensed around yet another emerging & profoundly disturbing revelation brought to our attention by Senator Rand Paul. While making a guest appearance on The Glenn Beck radio program recently, Senator Paul commented on a letter he had received from U.S. Attorney General Eric Holder dated March 4, in response to Paul’s inquiry of the government’s drone program. Specifically Paul had questioned Holder as to whether or not the President has the power to authorize lethal force to the extent of utilizing drone strikes against American citizens on American soil without due process & trial afforded all citizens in our country under the Constitution.

In his reply to Paul’s inquiry, Holder did not rule out the possibility of the President having the power to authorize drone strikes in the event of catastrophic circumstances such as those which have occurred twice previously in our history on December 7, 1941 & again on September 11, 2001.

Then we have a recently reported sighting by an airline pilot having allegedly witnessed a black drone hovering near JFK Airport as he was bringing his Plane in for a landing:

It’s unnerving how this characteristic of lying seems so prevalent & ingrained in this President & those of his administration to suit whatever political narrative they’re trying to further. Given everything they’ve been allowed to get away with so far, they’ve become emboldened with each successive lie that now they engage in this behavior with such casual brazenness & an arrogant nonchalance as if daring anyone to call them on it. We literally have a gang of pathological liars in control of our government!

But at the height of his hubris, Obama may have overestimated his skills just a bit when it came to the sequestration debate both he & fellow Democratic doom merchants turned into a veritable boondoggle of ridiculous apocalyptic prognostications that have since come back to haunt them.

As to whose fault the sequester was, lets refer to the recent incident of journalist Bob Woodward crying “Foul” after Obama declared the sequestration as being solely the fault of the Republicans. Woodward successfully refuted Obama’s assertion with documented evidence pointing to Obama & company as the culprits (that ironically the White House inadvertently helped provide Woodward with) then found himself in the cross hairs of a White House thugocracy campaign of intimidation & threats. Interestingly enough, other reporters have since come out of the shadows to detail their own experiences of having been intimidated & threatened in various encounters of their own as well.

Then we have another proxy stooge in this Obama line-up (Homeland Security Secretary Janet-“the system worked”- Napolitano) doing her part for the cause in trying to legitimize Obama & his Democrat henchman’s sequestration lies as she has went around touting after the sequester went into effect that the sequesters across the board budget cuts have had an adverse impact on air travel at air ports & would lead to furloughs at the TSA. Yet on the eve of the sequester going into effect & prior to Napolitano’s shameless exhibit of willful deceit, TSA committed itself to a $50 million dollar contract deal for new uniforms.

But then what better can we expect from this abhorrent excuse of a Homeland Security Secretary whose DHS is buying up billions of rounds of hollow point ammunition along with thousands of armored mine resistant vehicles? A Homeland Security secretary who initially stated she played no part in the decision to release  over 2 thousand illegal aliens (as we’ve recently begun hearing so much about) being cut loose back onto Americas streets to put American citizens at risk!

The Obama White House came out after the fact when this story broke in the midst of Obama’s sequestration fear-mongering, stating they had no knowledge of these illegal aliens being freed. Napolitano says she had no part in the decision. So just who the Hell is running this circus?? Then when you bundle this with the backlash of criticism Obama has begun receiving for his over the top rhetoric during the final week leading up to the sequester going into effect from none other than his own fawning sycophants in the liberal media, & people are questioning if the tide isn’t beginning to turn against Obama. Particularly in the turn of events when it comes to the drive by medias recent harsh treatment of their Golden Boy in the White House. My opinion on that however is a solid, “NO“! It’s simply a “bump in the road”. Obama just overplayed his hand with such extravagance & to such an extent, there was no way these clowns in the mainstream could hope to assert even a margin of credibility with the American people if they didn’t at least give some appearance of reproach to Obama’s absurdities. I think they have to be aware on some level that they’re skating on thin ice with the people as it is.

So lets review here. We have Obama’s Attorney General not ruling out the President having the power to authorize drone strikes on American citizens on American soil without the due process of law that we’re guaranteed under the Constitution (but then we already know what Obama & his people think of our Constitution tho’). Yet on Wednesday, March 6, while the Judiciary Committee held a Department of Justice oversight hearing, Texas Senator Ted Cruz confronted Holder pressing him in regards to the particulars of his letter to Rand Paul, questioning Holder on the Constitutionality of utilizing drone strikes against American citizens on American soil:

I’m liking Ted Cruz more & more! The liberal medias “Joe McCarthy” of our day. I’d wear that label like a badge of honor if I were him. Proudly! But moving along…

We’ve all witnessed the execution of such contemptible lies this President & his lackeys have relied on (even when they’re busted in them red handed) to purposefully deceive the American people with. Obama’s not hesitant to cause suffering for Americans either apart from his deceiving them just to advance his political agenda as we’ve seen by his releasing thousands of illegal aliens back onto American streets, rife with potential hazards to American citizens & their safety (but then look to Obama’s regards of those American’s in Benghazi who perished under his absence of leadership). Despite Obama’s deranged prophecies of nation sweeping catastrophes if the sequester goes into effect, apparently things aren’t so bad as originally thought however since our new Secretary of State John Kerry announced the United States will be giving the Muslim Brotherhood controlled government of Egypt $250 million in aid.  Really?? Along with the $213 million dollars worth of Abram tanks & F-16 fighter jets we’ve already provided to them as Obama decimates our own military along with everything else exceptional about our nation?!

I think we’ve pretty much figured out that Obama’s an established liar of the lowest order. Our nation & the American people suffer under his decomposing influence while our enemies profit & become proliferate. Which then begs the question;

How are we suppose to fight terrorism effectively when our biggest terror threat comes from those within our own government?!