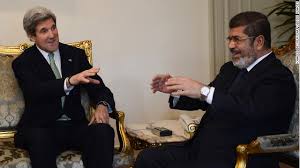 WASHINGTON, March 7, 2013 /PRNewswire-USNewswire/ — Secretary Kerry met with Egyptian President Morsi last week, announcing that the US will give Egypt $250 million in aid. While applauding continuing economic support to the suffering people of Egypt, Coptic Solidarity expressed deep concern that US foreign assistance be used to bolster a Muslim Brotherhood-led government, which has actively undermined the civil rights of millions of its citizens.

Additionally, further US aid is promised to Egypt conditioned on reforms. Benchmarks to measure and monitor these achievements and reforms remain unclear.

Religious minorities such as Coptic Christians have faced increasing discrimination since Morsi came to power. The Sharia based Constitution favors Sunni Muslims and all Egyptian law is subject to this interpretation. The “blasphemy” laws are effectively used to terrorize the Copts and liberal media and the new “Civil Associations and Institutions Act” will severely restrict the ability of NGOs to form and operate within Egypt, further limiting the ability of religious minorities and opposition forces to coordinate and mobilize.  President Morsi and the Muslim Brotherhood are actively engaged in power grabbing and establishing a theocratic dictatorship.

Salafists and other Islamists have perpetuated numerous attacks on Coptic Christians including the Maspero Massacre with impunity. Last year alone, Muslims kidnapped or lured tens of Coptic girls and Egyptian authorities have done little to rescue and return them to their families. The issues impacting the Coptic minority in Egypt are numerous, effectively relegating them to lives as second class citizens.

Egypt’s advance to democracy has been derailed. The country’s economic woes foretell greater instability and poverty. Morsi’s use of oppressive measures and his social and economic policies have greatly contributed to this situation. While US support is essential to ensuring the emergence of a stable and prosperous Egypt, bailing out an ineffective government underminesEgypt’s floundering democracy and decreases chances that Morsi will work towards making Egypt a more pluralist society.