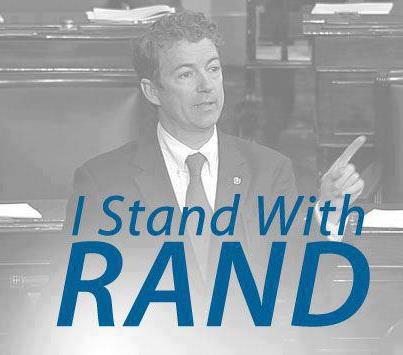 On Wednesday March 6, 2013 I feel that the momentum of a nation in distress started to reverse course. One Patriot stood tall and launched a 12-hour filibuster that was not about party lines. It was about millions of Americans who have been begging for answers. It was about Patriotic Americans who love the constitution.

Tonight it became apparent to millions of Americans that one man in Washington D.C. still cares about the people. I am so proud of Senator Paul for having the guts to stand up and demand the truth.

I have been thinking to myself for the last hour or so of what I could do. We need to let him know that we stand with him and appreciate his efforts, not only from tonight, but, for the times he has stood up for America in the past. I came up with a simple idea. Let’s all tell Senator Paul what we think in the form of an open letter. But unlike most open letters I want this to be interactive. In other words, I am going to write a personal message and I want you to do the same. Make it as long or as short as you would like.

After we get a good number of comments I will forward everything to Senator Rand Paul by email, so he can see that we stand in support of him. It is not often that an American Politician exhibits the courage that Rand Paul did tonight. We need to send the biggest Thank You that we can muster. I am going to write my personal message now. Please add to it, in the comments, so we can send our message to the good Senator.

WE STAND WITH RAND.

I am nothing more than an obscure blogger that not many people have heard of. I only became a blogger because I have too much free time on my hands lately. I am a metal worker by trade, but twice in the last two years I have had bankrupt companies close their doors and leave me unemployed. I am a frightened father of three with twins on the way. It’s not the best timing for two more.

I am not frightened because of financial stresses, nearly as much as the stress of watching the country I love fall to pieces. I am sick of seeing the tyrants win in Washington D.C.

I call myself a Conservative and a Patriot and that puts me on the lists that I don’t deserve to be on. I am labeled a potential terrorist in some circles.

I have to keep telling the truth, however. I can’t raise my children in a country that is hell-bent on taking away every constitutionally protected right that I have. Honestly, I fear for my life Senator Paul. Somehow I wrote an article that went viral a couple of months ago and has been seen by millions of people. It was an article about the 2nd Amendment and…how we should not back down if they try to take our guns. I suppose it was controversial. But since when has the constitution been controversial? It’s the law of the land.

Nevertheless I am little paranoid lately. I am frightened that I might be on the wrong lists now and that I might be one of those “targets” that you talked often about on Wednesday evening. I know how people are silenced in this country. Too many convenient deaths have happened in recent years.

I have a lot of Patriotic friends who are just like me. We refuse to back down. We can not sit and watch our country destroyed like this. We can not watch the constitution taken apart, piece by piece. We feel very alone because we feel that no one represents us.

Tonight we did not feel alone. Tonight we felt like someone was on our side. I have personally not felt so proud of what was happening in the Senate in many years. And with risk of destroying my credibility I will admit…this is the first time I have tuned into C-SPAN in probably 10 years.

It’s not that I don’t care. I am just so tired of being disappointed and lied to. I want to let you know that a lot of us, including myself, believe that 2016 may be too late. I believe that this administration is determined to destroy America before 2016 comes to pass. At the same time I want to tell you that if you are on that ballot in 2016 I will be firmly in your corner. If I am still writing this blog I will do everything in my power to reach out to people on your behalf and to make sure you win.

I also have to believe that if you continue to show the mettle you showed us tonight that maybe 2016 won’t be too late. If you continue to stand for the constitution then maybe you will inspire others to do the same. All it takes is a spark and I am hopeful that you have inspired your fellow lawmakers.

I know what your stance is on the U.N. Small Arms Treaty and I hope that your fight for us is just as fierce when that comes to the floor of the Senate. Americans are not stupid. We know about Obama’s backdoor plan to take away our 2nd Amendment rights. Those rights are not bestowed by Obama. They were given to us by God and protected by our constitution. Obama is not God and neither is the United Nations.

Senator Paul I am proud of you. I am fighting back a Patriotic tear as I type tonight. I want you to know that I stand with you and I want to Thank You for doing your job to represent us. It’s a crazy world we live in when a public servant is thanked for doing his job, but that is how corrupt our government has become.

You are a hero for standing on principle because in this day and age that is the exception and not the rule. Please keep fighting for us. There are a lot of things that are going unanswered now and we deserve the truth. We will not sit idly and watch our constitution destroyed and we are very proud to have you in our corner.

It is a shame that I can’t write letters like this to my own Senators, but as far as I’m concerned you are my Senator. Thank You for representing Missouri Senator Paul.