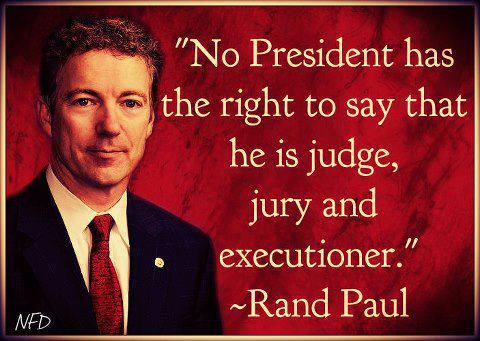 As American’s go about their business the day after Kentucky Senator Rand Paul’s nearly 13 hour long record setting ‘anti-drone’ Senate filibuster (a concerted effort assisted by some of his fellow Republican colleagues & one Democrat to delay the final votes to confirm Obama’s choice of John Brennan as CIA director), there’s much opinion being opined today about Senator Paul’s concerns & motivations centering around U.S. Attorney General Eric Holder’s recent contentious claim that this President has the power to authorize drone strikes of American citizens on American soil (albeit this alleged utilization of drones being provisional upon certain mitigating catastrophic circumstances occurring). Yet many are familiar too with the old adage that, “the road to Hell is paved with good intentions.”

But while there is a barometer of wide ranging opinions being expressed both in support of & in criticism to Senator Paul’s concerns & while many seem focused on the Constitutionality of this debate, few if any seem attentive to the prevalent conditions of the reality we’re living under now. Emphasized by the confluence of merging aggravated circumstances having developed from this Presidents own demagoguery of our Constitution. Emphasized by Obama’s overall political demolition & division of our nation…

…Emphasized by Obama’s rendering vulnerable both our national security & military defense while appeasing, arming, & financing –with our money- radical Islamist elements throughout the Middle East while also facilitating their incursion into the U.S. government through his own administration, & finally emphasized in this vacuum of leadership going on 5 years now, all of which (when you tally everything together) should sound alarms for anyone in their right mind at our even needing to have this drone debate to begin with!

Of Senator Paul’s critics we have (not surprisingly) 2 GOP RINO “usual suspects”. Arizona Republican Senator John McCain (whose criticism I care about as much for as I do this irrelevant man who gave us Obama) & South Carolina Republican Lindsey Graham (whom scoffed at Senator Paul’s questioning of whether or not the President has the authority to utilize drone strikes to kill Americans on American soil & apparently found the question itself offensive, now crediting Paul’s filibuster at persuading him to vote in favor of Brennan).

Given both of these RINO’s willful lack of opposition to Obama’s treasonous agenda to fundamentally warp our country beyond recognition through his subversive legislation’s & Executive Orders, they both need to shut their mouths & give the venal pomposity of their resentful egos a rest. I think we can safely assume what the source of their self-centered umbrage with Senator Paul is, who -as far I’m concerned- has shown more regard in his filibustering for the American people than either McCain or Graham have demonstrated for American’s throughout the length of either of their political careers combined.

Yeah, Senator Paul did go ahead & vote to confirm Chuck Hagel as Defense Secretary after leading the charge to oppose him, but I’ll let Paul defend himself in his own words regarding his reasons for that decision:

Which all brings me back to the point I’m trying to make here. What has become of what once use to be the people’s government that we should even find it necessary to have this drone debate?! The answer to my question can be found in the question itself:

“Use to be”, because it’s NOT the people’s government anymore!