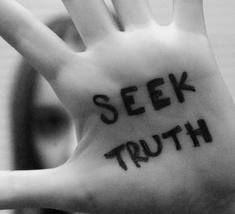 America, you can’t handle the truth.

Give me 10 minutes to tell you. Do you know why your parents & grandparents were called the greatest generation? The time came that liberty and freedom were being taken & millions were being slaughtered around the world. Americans in world war one and mostly in world war two said this must stop. Our parents & grandparents stopped their lives, they left their jobs, their homes, their loved ones, their children & went overseas & fought and died to stop the loss of freedom & individual rights. They died by tens of thousands on beaches in Europe and in small Islands in the Pacific because it was the right thing to do, and if it was not stopped there we would be fighting in our streets. Well America we are fighting on our doorsteps now & if we don’t come together, if we don’t STAND & FIGHT now we will no longer be the land of the free. Do you remember 9-11, the media brought us together to fight as one but now the media has changed sides & is keeping America from knowing the truth that the Obama administration is dismantling America and the constitution without a word being screamed aloud from shore to shore.

The sad truth is many republicans are also voting for these laws that are taking our freedoms & personal liberties. After the Newtown, CT – Sandy Hook school shooting the liberal media has tried to make everyone think passing Obama’s & other liberals gun control laws will stop any further of these shootings but the truth is if all these unconstitutional laws were passed they would not stop any of the past mass shootings, not one. The media is also trying to make the country think that the reason there aren’t any guns or ammo for sale is because of a run on guns and ammo after the school shooting.

This is also a lie. There was a rush to buy AR15 types of guns and the ammo for it because Obama & Feinstein & other liberals want to ban these guns in their first step to ban all guns. This was many months ago. Since this time Obama and his leftist liberal supporters have tried to get many laws passed, as soon as possible, without any discussion or debate in congress, with no luck. Obama stated, when he first was elected, he would go after the guns under the radar. Obama said this knowing he could not get the outrageous ban on guns he and his liberal left-wing supporters wanted. Obama has another plan he has been using to stop gun owners from using their guns that is now just being made public.

I spoke to a Washington State ammunition manufacturer last spring when I bought my AR15 and began stockpiling ammunition. I had a nice long conversation with him when he informed me to buy all the ammunition & all the bullets I could find and afford so I would have some to load my own ammunition because Obama was having laws passed that no one was paying attention to. Laws that made the import of pre-made bullets, lead & copper for ammunition from foreign countries illegal or so highly taxed they no longer would sell them to the United States. THIS IS HOW YOU CONTROL THE GUNS AND AMMUNITION IN THE UNITED STATES WITHOUT GOING THRU CONGRESS.

Obama has this plan not just for guns and ammunition but if you read the laws that have been passed, since Obama was first elected as president, you would scream “why are they taking my freedoms and my rights.” We know Obama was the most left leaning liberal in the U.S. Senate by far. Obama has used drones to kill American citizens without even being charged. The decision to kill or not kill American citizens is left up to a politician, not a judge or a jury. Now Obama wants to pass a law allowing this in the United States. Rand Paul tried to stop it. The real questions are “why are the republicans in the house agreeing to these laws and passing them in the house?” These laws have nothing to do with guns and ammo but are about Americans freedoms, their rights & the Constitution of the United States of America. It has come to a time in history that this generation of Americans Get off our lazy butts and stand up, time for us to pay back our parents generation for the sacrifices & hardships they endured in World War one and two, it is time for us to stand up & protect the freedoms & rights our fathers & forefather died to ensure we could enjoy. If this generation would take the time to read what has really been going on in Washington D.C. in their name, find out what the elected traitors not only in the White House but also the congress & senate. America, along with its freedoms & Bill of Rights, is becoming a shell of what this country was when it was the greatest country of the World.

The question is will America trade its freedoms & its liberty for a smart phone, a computer & a video game?

Thank You so much Brian for sharing your thoughts with us today. Our readers are always encouraged to share their thoughts and experiences. The D.C. Clothesline is a blog of the people and by the people. If you would like to contribute, please send your submission to [email protected] -Dean Garrison