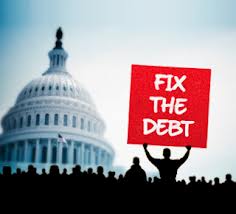 WASHINGTON, March 15, 2013 /PRNewswire-USNewswire/ — Today, the Campaign to Fix the Debt sent a letter signed by over 160 of the nation’s leading economists and thought leaders to President Obama, House Leaders Boehner and Pelosi, and Senate Leaders Reid and McConnell. The letter urges Washington to continue its work addressing our nation’s economic challenges and mounting debt burden and encourages enactment of a plan to improve our fiscal trajectory, grow the economy, and put the debt on a more sustainable path.

“Many of the country’s premier economic minds have joined the Campaign’s call to action, speaking to the urgency of our nation’s debt crisis and hopefully serving as a wake-up call to the President and Congress to fix it,” said Maya MacGuineas , head of the Campaign to Fix the Debt and one of the letter’s signatories. “The 161 men and women who signed the letter have an intimate and high-level understanding of the economic implications of our growing debt and join over 350,000 grassroots supporters, 170 business leaders, 100 former Members of Congress, and many others in their support of a meaningful deficit reduction plan.”

The letter was delivered to leaders at the White House and on Capitol Hill this morning. A full list of signatories can be foundHERE.

We are writing to urge you to continue the work of addressing our nation’s economic challenges and our mounting debt burden.

Promoting an economic expansion that accelerates job creation, while at the same time addressing the long-term debt challenge, will require that we change our current approach to fiscal issues.

Rather than indiscriminate cuts to just one part of the budget, we need a smart and gradual debt reduction plan that will promote long-term growth and stability. By enacting a comprehensive plan now that reforms the tax code and addresses the largest drivers of our fiscal problems over the long term, policymakers could avoid the negative effects of abrupt cuts, sustain key investments in productive public programs, and simultaneously set a more sustainable trajectory for the nation’s debt—creating a virtuous cycle of growth and budgetary responsibility.

While the recent Budget Control Act and American Tax Relief Act represent progress, we believe there is a need for substantial further deficit reduction if the country is to remain economically strong. This is especially true over the long-run, where rising health care costs and changing demographics threaten to drive our national debt to unprecedented levels.

We encourage you, our nation’s leaders, to identify a combination of spending reductions and tax and entitlement reforms sufficient to put the national debt on a downward path relative to the size of our economy. With a well-designed deficit reduction package, we can reassure markets and employers, grow our middle class, and restore faith in our political system.

On the other hand, failing to act could very well jeopardize our economic prosperity and the future of key programs on which millions of Americans rely—both today and for generations to come.

While we may find differences of opinion about the specific policies that should be included in any plan, we all agree on the need for significant additional progress on this front.

Policymakers should enact a plan as soon as possible to improve our fiscal trajectory, grow the economy and put the debt on a more sustainable path.

The Campaign to Fix the Debt is a non-partisan movement to put America on a better fiscal and economic path. We come together from a variety of social, economic and political perspectives, around the common belief that America’s growing federal debt threatens our future and that we must address it. The Campaign will mobilize key communities – including leaders from business, government, and policy – and people all across America who want to see elected officials step up to solve our nation’s fiscal challenges.