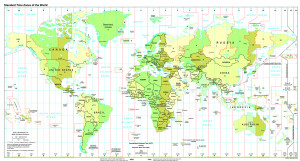 Below, verbatim and with all of my typos, are my three comments on a liberal blog.  Here is the link to that blog:

After I posted, I noted the time and day that my comment was credit as being posted to.  It was four hours different from my clock.  I am in Eastern Standard Time.  As the Official CIA Time Zones Map shows, this blogger is based in western Europe.

The map is a little deceiving.  The lines follow the coasts.  As a test of this, type “Current time in London United Kingdom” in a search, and you will see the four hour difference displayed.  It is Greenwich Mean Time there.

It would look like a United States based blog on the surface.  But either the server or the blogger is not American.  I assume it is the blogger, as all my posts have my correct time and date posted on them.  I have to assume that either this is an expatriate weighing in, or this is a foreigner who is trying to meddle in our domestic affairs.

Precisely what the Founding Fathers were warning us about.

Oh, my comments there are awaiting moderation.

Be careful of what you read, and what you give credence to as either support or criticism of your cause.  Try to figure out who is saying what, and why.

So here are my comments:

“The contemporary literature is out there, the Federalist Papers, etc.  The history books are pretty extensive in their coverage.  The opinions of the Founding Fathers are also well documented both prior to and after the Constitutional Convention.  I would suggest that you do a little reading before you publish an article like this.  It regrettably is an opinion piece based on personal biases.

The thing that the Founding Fathers feared most was a future tyrrany.  The Constitution was basically built around that fear.  Liberals cannot get around that.  The only way to deal with that is to minimize the importance of the Constitution, and to try to get rid of it.

Your post furthers the Liberal agenda of gutting the pre-existing rights reiterated in the Bill of Rights Constitution.  As such, it is of negligible interest to those who know where this country is heading.  You have the right to forward a misinformed opinion.  The guns owned by the People assure that right stil stands, for now.  Regrettably, it is people such as yourself who will gut your First and Third Amendment rights by gutting other necessary Amendments to the Constitution.

Do not think for a minute that those who want to do your thinking for you will not oppress you the first chance they get.  There has not been a government in hostory that did not become oppressive once the people ceased to stand up to it.  I challenge you to show me one example of that not happening.  Gun ownership assures that such a thing will not come to pass easily in this country.

If you read the extant, contemporaneous literature, you will see that the Founding Fathers considered the Second Amendment to the U.S. Constitution ot be the insurance policy for the entire Constitution.  They themselves tell you that it is the right of the people to revolt against their government anytime that they see fit.  Nothing more, nothing less.

Again, do a little reading before you publish.  Your article is pretty well written, but is sadly misinformed.  I do not know if you care about that or not.  I am hoping you are a responsible journalist who looks at facts without any emotional involvement, and draw conclusions accordingly.  Your article would lead me to assume otherwise, and suggests otherwise.”

Measure everything you hear, see, and read strictly by American standards.