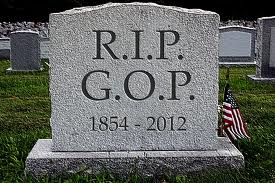 It looks as though the Republicans still haven’t learned their lesson even after foisting Bob Dole, John McCain, and Mitt Romney–the establishment’s preferred candidate in each of these cases–upon the American people.

As I first wrote about here, Karl Rove has created a Super PAC aimed at quelling all opposition to the Republican establishment in the primaries to ensure their preferred candidate wins the nomination in every race possible. (Read non-Tea Party.)

Now, according to this story, the GOP may be taking it to the next level:

Tucked in near the end of the 97-page report, formally known as The Growth and Opportunity Project, are less than four pages that amount to a political bombshell: the five-member panel urges halving the number of presidential primary debates in 2016 from 2012, creating a regional primary cluster after the traditional early states and holding primaries rather than caucuses or conventions.

Each of the steps outlined in the GOP report would benefit a deep-pocketed candidate in the mold of Mitt Romney. That is, someone who doesn’t need the benefit of televised debates to get attention because he or she can afford TV ads; has the cash to air commercials and do other forms of voter contact in multiple big states at one time; and has more appeal with a broader swath of voters than the sort of ideologically-driven activists who typically attend caucuses and conventions.

The recommendations are also a nod to the party’s donor class. Several donors bluntly told RNC Chair Reince Priebus at meetings right after the election that they wanted Iowa, with its more conservative base, to have less of a role in the process.

There you have it, the GOP power brokers want conservatives to have a smaller role in the process. Feeling used yet? If not, read on.

Back in 2010 the Tea Party was needed by the GOP so they embraced and exploited the movement, but now they feel as if the Tea Party has become a hindrance as the movement looks to unseat elitist establishment Republican candidates as well as Democrats. Because of this the GOP gestapo is putting its boots on the necks of the Tea Party and are in the process of trying to eradicate it politically for that is what people in power do when they feel something has outlived its usefulness. This is their attempt at what could be described as the GOP’s non-violent night of the long knives, will we go quietly in the night or will we fight on? You see, we were their useful idiots and we played right into their hands.

John Boehner, who is more comfortable sitting down to dinner with Barack Obama and listening to the president’s opposing views than he is with listening to opposition within his own party, has already begun the process of rubbing out the dissenting voices in his own party by punishing those who oppose him and threatening others in the party, and now the GOP is in the process of ensuring these people don’t make it to Washington in the future.

See, these young guns are upsetting the apple cart by challenging the authority of the GOP elite and that is frowned upon by the establishment Republicans in Washington who feel it is their right to be there.

In the end there are only two sides in this struggle; there is the ruling class and there is the ruled. Democrats and Republicans may differ on the the different aspects of control but control and power is still the end game and when push comes to shove the government will always rally around its own regardless of party because it is us against them. How else can you explain the Republicans’ unwillingness to go after Barack Obama on Fast and Furious and Benghazi? They may differ on what issues they should have control over in our lives but the end result is the same–less freedom and liberties for the American people.

At the risk of offending my regular readers I am going to be perfectly blunt with you: If you still think the Republican party is any better than the Democrats then you are also part of the problem.

Both parties care more about retaining power than doing what is best for the American people and it is time to start looking at another way forward from here on out.

We won’t be fooled again…..