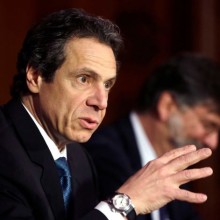 New York Governor Andrew Cuomo signed into law the SAFE Act in a manner similar to the Democrats in Congress. The similarity is that they really didn’t know all of what the massive Obamacare bill contained. The same is apparently true for Governor Cuomo, who is now looking to reverse a section of the unconstitutional law in order to help out his police officers.

Gov. Andrew Cuomo said Wednesday the state is not rolling back the nation’s most stringent gun control measure by keeping 10-bullet magazines legal, even though they would have been outlawed in a bill that passed earlier this year.

Cuomo and legislative leaders in state budget talks plan to change the law that was passed in January before a provision kicks in banning the sale of 10-bullet magazines. The gun measure outlaws the purchase of any magazines that carry more than seven bullets, the nation’s most stringent limit. That would have put a severe limit on the sale of guns with industry standard 10-bullet magazines when the provision of the law went onto effect on April 15.

“There is no such thing as a seven-bullet magazine. That doesn’t exist, so you really have no practical option,” Cuomo said. He told reporters that any suggestion this will be a rollback of the law is “wholly without basis.”

Cuomo said the state needs to allow the sale of handguns and rifles with 10-shot magazines, but New Yorkers will still be required to keep no more than seven bullets in them, except at shooting ranges and competitions. Violating the seven-bullet limit is a misdemeanor, but a violation if the magazine was in the owner’s home.

And the point is? Wait there is no point to this mess except he shot himself in the foot with this legislation in the first place (pun intended).

The mayor said that the law is still enforceable. He also “minimized the cleanup now needed in the bill as addressing “ambiguities” and “grammatical errors” and routine for complex measures. They include exempting police and their weapons and allowing Hollywood to continue to film violent movies and TV shows in New York using weapons outlawed under his measure.”

Following Cuomo’s signing into law the sweeping gun control bill, his job approval rating dropped from 74% to 59%! Quinnipiac Poll director Maurice Carroll noted that Cuomo’s numbers were in the stratosphere, and that he “had the political capital to spend.”

“It is possible that the gun law cost him some of that political capital, but a 2-1 job approval rating still makes him the envy of most governors,” Carroll said.

Ya think? People in New York are pretty ticked off at the Governor and the legislature despite what the media outlets may tell you. I hear from people every day from NY and they have had it with the overreach of a tyrannical government.

It seems the courts are also standing on their side to some extent. Recently, a New York Supreme Court judge slapped down New York City Mayor Michael Bloomberg’s “Big Gulp” ban.

Additionally, Benjamin Wassell is the first man to be arrested under New York’s SAFE Act. The outcome of this case is still yet to be determined, but may be instrumental in setting the stage for what the courts have to say about the legislation and whether or not it will stay in place or be struck down, as it should be.

Tim Brown is the editor of Freedom Outpost. Please visit his site for more conservative news and opinion from some of the best conservative authors on the net. I’d like to thank Tim personally for his continued support to both myself and the readers of The D.C. Clothesline. -Dean Garrison