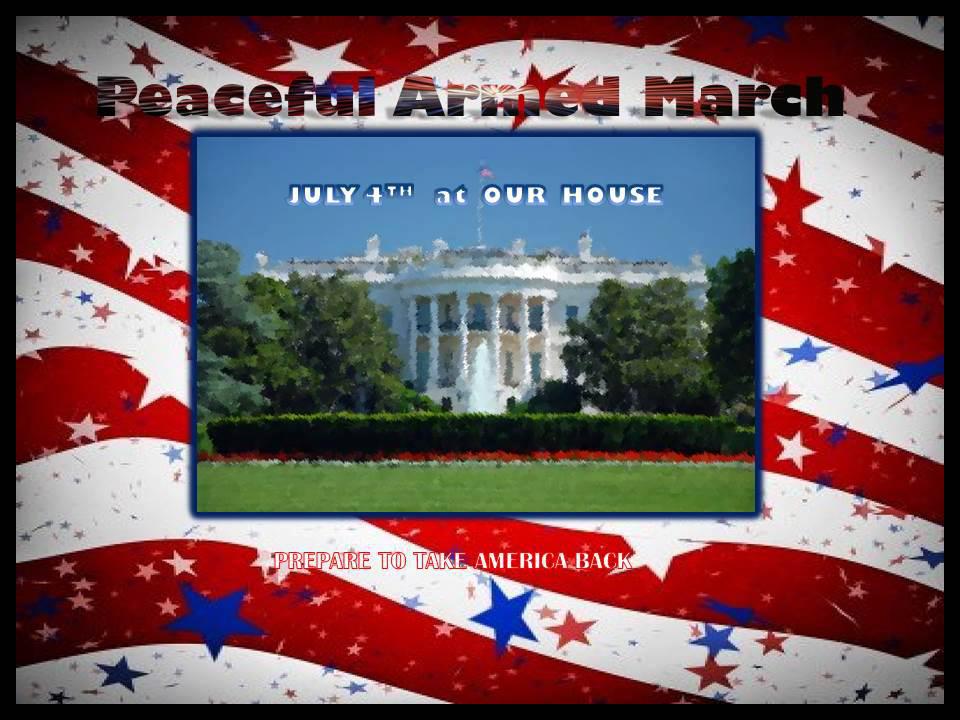 On Thursday a Facebook  Page called “Prepare to Take America Back” published a status update in an attempt to organize a peaceful “armed” march on Washington D.C. for July 4th. Below is the exact quote from the status update:

“I will be very clear about this peaceful armed march. I really want to thank all of you for your input, but it really boils down to you have the choice to be there or not. I am not forcing one person to go. The reason for this march is very simple to let our government know “WE THE PEOPLE” are here and they should be listening to us. We are not going for trouble, that is why we are consulting with police and yes our military. We have a constitutional right to have this march and we will exercise those rights. By the way any gun law that infringes on the second amendment is an unconstitutional law. I am glad to see a healthy debate going on about this subject. So lets be clear you can come to this march armed or unarmed, or you do not have to come. This march will take place with or with out the ones that are not going to come. So debate all you want to, but please understand we know FB is watching what we post and the government is watching what we post. We think this is a good thing because they might just learn something. But the way I see it as of this time it is 80% for the march and 20% against the march. I respect all of your opinions so carry on the debate……OOORAH

At the time of this writing this page had over 60,000 fans. The post had 277 likes and had been shared 149 times.  There were also 131 comments. If Facebook does not suspend or remove the page, it can be found here. It should also be noted that this was not the first post on this topic. This was obviously a follow up to an earlier post.

We can not discount that, at least potentially, a large number of people are involved here.

It would seem that some really bold people are stepping forward, but we must ask ourselves if this is a good idea. I am not about to give this page the publicity that I have just given them without looking at the potential risks and rewards. Upon doing some quick research I found that both concealed carry and open carry are disallowed in Washington D.C.

“The District of Columbia does not permit the concealed carrying of firearms. Open carry is also prohibited. A lawsuit was filed on August 6, 2009, to compel the district to issue permits to carry weapons.”

“Following the Heller decision, the Washington D.C. City Council enacted a set of rules regulating the possession of handguns in citizens’ homes. In addition to each handgun being registered with the police, the rules require that D.C. residents undergo a background check and submit fingerprints. The firearms registry photographs the applicant. Residents must take an online gun safety course, and pass a written test on the District’s gun laws. Residents must also declare where it will be kept.”

Source for both quotes: http://en.wikipedia.org/wiki/Gun_laws_in_the_District_of_Columbia

So is this a good idea? I guess it depends on who you ask. But why would I want to march on Washington D.C. peacefully only to lose my gun and be arrested? What does that solve?

I will be totally frank with you, which may be against my best judgement. If I am marching into Washington D.C., with a gun, I would have to think that it would be to use it.

I know that people are angry but it does no good to get arrested and lose your guns. Those of us who are convinced that the government is trying to take our guns surely don’t want to give them exactly what they want. That’s like the old saying “cutting off your nose to spite your face.”

Why would I want to show up on Barack Obama’s doorstep and give him my guns and my freedom? To me that’s the mindset of a suicide bomber who is more concerned with the suicide than the actually bombing.

I don’t believe these people have really thought this through. This is not a typical protest. Showing up at The White House with a gun may warrant more than the traditional cool down time in a city or county jail. That could put you in a federal prison for an extended stay and don’t believe that it can’t. So why in the hell would I march on Washington D.C. with a gun that I did not intend to use?

That’s my opinion. My opinion and $5 will buy you a coffee at Starbucks, but I don’t see any kind of “peaceful” protest working in this country. To believe that a peaceful protest will work would imply that the other side has a certain amount of honor. I don’t believe that the people who want to take my guns have honor. They want to enslave me. Why should I volunteer for that fate?

You only get results in negotiations by using leverage. If you do not come from a position of strength then you have no negotiating power. To me this sounds like a small group of people who want to martyr themselves for the cause. But please wake up people, we need you.

Over the next week I will be working on a project to help organize people nationwide. People must gain strength locally which will breed the organization they need to have power nationally. Everyone is trying to put the cart before the horse and I have been guilty of it myself. I am not currently endorsing any marches on Washington D.C.

But if fate does ever find me in Washington D.C. with a gun, then it will be my intention to use it. Do you know why all of these peaceful protests fail? Do you know why Occupy Wall Street and dozens of other peaceful movements failed in this country?

It’s because people don’t understand the rules of negotiating with the corrupt. To gain a peaceful end you must show strength. I learned a lot by watching Ronald Reagan during the Cold War. The threat of loss motivates people. Until you can show these clowns that they have something to lose, they will continue to laugh at you while their entourage arrests you and takes away even more of your rights. Is that what you want?

I applaud the courage of these people for wanting to do something, because so many people are willing to sit back and watch it happen. But please use your heads my friends. When everything comes to a head we will need you all.

Feel free to express your opinions in the comments section below.

My perception of this “peaceful” protest has changed. After I printed this last night I immediately got a message from a friend who asked me if I was going. My response was that I would not march on Washington D.C. with a gun unless I intended to use it.

He told me that this was the point. I was a little confused because of other “peaceful” protests such as the recent protest in Oregon where people openly carried high powered rifles. There is a difference. You are allowed to open carry in Oregon. So to me this made zero sense. It seemed like people were simply planning on marching on D.C. and, for all intents and purposes, saying, “Please arrest me and lock me up.”

This is not necessarily the case and people need to understand this. My friend may represent 1% of those who are planning on going and he may represent more, but it will not take much. If he opens fire due to a perceived act of provocation then you need to understand what you are part of. If you are standing next to him, totally unarmed, it may not matter what your intentions are. If 1% are going with the intent of opening fire then that is all it will take.

We need to understand the underlying ideas that some people have and understand, without a doubt, that this could be the start of an American Revolution. At this point I am going to pray and look for my own answers, as we all should, but one thing is for certain. My efforts to organize people locally will be very important now. If this sparks an armed revolution then people must have contacts in their own area, because we all know that in a case of national emergency the federal government can cut off all communications and even seize vital utilities and resources of our communities. No internet or cell phones. You may be lucky to have electricity or water.

I could see the obvious problems with a “peaceful” armed march on Washington D.C. when I originally wrote this. Now I can see that the intent is not a peaceful march at all. It does not matter if 99% think it is “peaceful.” When shots are fired the rules will change.

This needs a lot of discussion because if you are going you need to understand that this is not a march where you will show up with your signs and megaphones, stay for a few hours, and go home. This could be the start of a war, and no matter what your intentions for a “peaceful” protest you could find yourself in a war zone in a hurry.