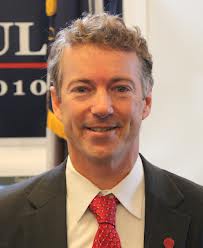 Mar 26, 2013 Press Release from The Office of Senator Rand Paul

WASHINGTON, D.C – On Friday, March 22, Sens. Rand Paul, Mike Lee (R-Utah), and Ted Cruz (R-Texas) issued a letter to Senate Majority Leader Harry Reid (D-Nev.), stating their intention to oppose any legislation that would threaten to eradicate U.S. citizens’ Constitutional right to bear arms, as prescribed in the Second Amendment. The Senators intend to refuse consent to adopt the motion to proceed and will decide if further action is necessary if the legislation gets closer to consideration. Below is the text of that letter.

We, the undersigned, intend to oppose any legislation that would oppose on the American people’s constitutional right to bear arms, or on their ability to exercise this right without being subjected to government surveillance.

The Second Amendment to the Constitution protects citizens’ right to self-defense. It speaks to history’s lesson that government cannot be in all places at all times, and history’s warning about the oppression of a government that tries.

We will oppose the motion to proceed to any legislation that will serve as a vehicle for any additional gun restrictions.