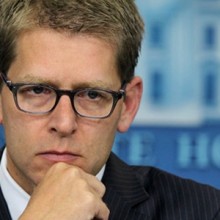 The Constitutional Sheriffs and Peace Officers Association (CSPOA) has the support of at least 381 sheriffs and the cooperation of at least 15 state sheriff associations stating that they will not enforce federal or state gun laws they consider unconstitutional.

At a press conference on Tuesday, White House Press Secretary Jay Carney was asked by CNSNews.com, “There have been 381 sheriffs that have signed on saying they would not enforce gun laws they believed were unconstitutional. Would the administration have a problem if local law enforcement did not enforce whatever gun package were to pass?”

While Carney said he had not seen the list of sheriffs, probably like he claimed a video was responsible for Benghazi, he did say, “I think as a general proposition we think that people ought to follow the law. As an absolute matter of fact in my view, and I think many other constitutional experts, there’s not a single measure in this package of proposals the president has put forward that in anyway violates the Constitution. In fact, they reflect the president’s commitment to our Second Amendment rights.”

Obviously releasing documents to the people regarding Fast and Furious, bringing forth the survivors of Benghazi to testify to Congress about what took place and other scandals in this administration have nothing to do with following the law for this White House.

Richard Mack, a former sheriff of Graham County, Arizona, who now educates American sheriffs on the law, was one of seven sheriffs in 1994 that challenged the constitutionality of the provision in the federal Brady bill that require sheriffs to perform background checks. They won that argument in a 5-4 decision by the Supreme Court.

Mack contends against Carney’s claim that people ought to just follow the law. He says people shouldn’t follow the law when it contradicts the Bill of Rights

“When Rosa Parks didn’t give up her seat on the bus, should she have been arrested or should the police have escorted her home?” Mack said. “The law was to arrest her. It was a stupid, unconstitutional law.”

In referencing new legislation being considered, Barack Obama’s demands and the Supreme Court, Mack said, “Every one of the sheriffs is going to follow the Constitution, not follow the president or the Supreme Court. The Supreme Court has already ruled twice for the Second Amendment. The federal government has no right to tell me how many magazines I can have, how many guns I can have and how much ammunition I can have.”

Not only have sheriffs stood up against the tyrannical Obama administration on this issue, but so have state officials.

This comes as Texas State Representative Yvonne Davis (D-Dallas) has proposed legislation that would remove any sheriff or law enforcement officer who refuses to enforce state or federal law. The text of Ms. Davis’ bill (HB no 2167) reads in part:

Sec. 66.004. FAILURE TO ENFORCE STATE OR FEDERAL LAW. (a) For purposes of Section 66.001, a person holding an elective or appointive office of this state or of a political subdivision of this state does an act that causes the forfeiture of the person’s office if the person:

(1) wilfully fails to enforce a state or federal law in the course of the person’s official duties;

(2) directs others subject to the person’s supervision or control as a public official not to enforce a state or federal law; or

(3) states orally or in writing that the person does not intend to enforce a state or federal law in the course of the person’s official duties.

(b) For purposes of this section, “law” includes any rule, regulation, executive order, court order, statute, or constitutional provision.

(c) This section does not apply to a law:

(1) that has been held to be invalid by a court with jurisdiction over the territory served by the officer; or

(2) the validity of which is currently being challenged in a court with jurisdiction over the territory served by the officer.

(d) The attorney general or appropriate county or district attorney shall file a petition under Section 66.002 against an officer to which Subsection (a) applies if presented with evidence, including evidence of a statement by the officer, establishing probable cause that the officer engaged in conduct described by Subsection (a). The court in which the petition is filed shall give precedence to proceedings relating to the petition in the same manner as provided for an election contest under Section 23.101, Government Code.

(e) If the person against whom an information is filed based on conduct described by Subsection (a) is found guilty as charged, the court shall enter judgment removing the person from office and disqualifying the person from public office for a period of 10 years.

Keep in mind that sheriffs are elected officials. They are put into office by the people and serve at their consent, not at the bidding of bureaucrats. So do these pompous representatives in Washington and at the State level. Under this legislation, a law enforcement officer or sheriff found guilty would be removed from office and not allowed back in office for a period of ten years. Seriously, this should be applied to Ms. Davis and those who think like her, not upstanding sheriffs who are dismissing unlawful laws.