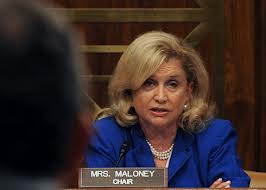 The gun grabbers are now looking at innovative ways to implement gun control laws and the latest example of this is a proposal by Democrats in the Congress to force gun owners to purchase liability insurance before they can practice their second amendment right.

When New York Rep. Carolyn Maloney introduced the legislation last month with eight other Democrats, she boasted that it is “the first bill to require liability insurance of gun buyers nationwide.”

Maloney’s “Firearm Risk Protection Act” requires gun buyers to have “a qualified liability insurance policy” before they are able to legally purchase a firearm.

It also calls for the federal government to impose a fine as much as $10,000 if a gun owner doesn’t have insurance on a firearm purchased after the bill goes into effect.

“It shall be unlawful for a person who owns a firearm purchased on or after the effective date of this subsection not to be covered by a qualified liability insurance policy,” the bill text reads.

Forcing Americans to buy insurance or face a fine, where have I heard that before? Oh yeah, Obamacare.

This is why the Supreme Court’s decision–thanks to President Bush’s nominee John Roberts–on Obamacare was so disastrous and so dangerous; for the first time in American history it has been adjudicated that the American people can punished through taxation for not behaving in a manner the government sees fit. And all this time I thought we fought Great Britain to free ourselves of this type of tyranny.

With the Obamacare mandate being upheld as a tax the government is now free to implement this same type of policy on virtually every single issue and it was only a matter of time before the Congress figured this out, and they have.

With the federal government being emboldened by John Roberts’ decision this will soon be the norm when it comes to government and not the exception. This is only the beginning, and to all the liberals out there who think this is a good idea I would remind you that someday another party may be in control of the government and they may decide to use this same tactic to force you to accept mandates with which you do not agree.

Tyranny comes in many forms…..