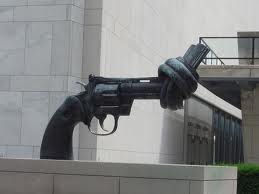 Today the United Nations passed the controversial Small Arms Treaty. With 2nd Amendment proponents, led notably by the NRA, the question now becomes how this will effect Americans’ rights to bear arms. The United Nations has released this statement on their official website:

“2 April 2013 – The United Nations General Assembly has approved a global arms trade treaty that failed to achieve unanimous support last week but which garnered the support of a majority of Member States when put to a vote today.

The resolution containing the text of the treaty, which regulates the international trade in conventional arms, received 154 votes in favour. Three Member States – Democratic People’s Republic of Korea (DPRK), Iran and Syria – voted against the decision, while 23 countries abstained.

Today’s action follows the failure of the Final UN Conference on the Arms Trade Treaty (ATT) last Thursday to reach an agreement among all 193 Member States on a treaty text at the conclusion of its two-week session.

Speaking ahead of the vote, the President of the General Assembly, Vuk Jeremic, called the text “groundbreaking,” as well as “robust and actionable.”

He recalled that in 2006, Member States had pledged in the same General Assembly Hall to engage in a multilateral effort to produce a legally binding instrument, establishing common standards for the import, export and transfer of conventional arms – including warships and battle tanks, combat aircraft and attack helicopters, as well as small arms and light weapons.

“I personally believe that the final text of this conference meets those commitments to a great extent,” Mr. Jeremic said, adding that the lack of a regulatory framework for such activities had made a “daunting” contribution to ongoing conflicts, regional instabilities, displacement of peoples, terrorism and transnational organized crime.

The text draws a link with the presence of weapons across the developing world, especially in conflict-affected areas, with the challenge of sustainable development and safeguarding human rights, added Mr. Jeremic.

The President of the ATT conference, Ambassador Peter Woolcott of Australia, noted that the conference “came very close to success.” He praised all delegations for “working hard and negotiating in a constructive manner and looking for success,” adding that the different interests and perspectives in the conference room required work through complex issues.

Each version of the text built on previous ones, Mr. Woolcott said, and represented “a fair expression of negotiation, compromise between many different interests in the room, and ultimately what might command consensus at the end of the final conference.”

Once the text was rejected Thursday evening, a Member State introduced a General Assembly draft resolution that same evening, according to the Office of the President of the Assembly.

Unlike in the Conference, where all 193 Member States had to agree on the final text, the Assembly needed only a simple majority, or 97 votes, to pass the text. The treaty will enter into force 90 days after ratified by the 50th signatory.

According to the UN Office for Disarmament Affairs, the treaty will not do any of the following: interfere with domestic arms commerce or the right to bear arms in Member States; ban the export of any type of weapon; harm States’ legitimate right to self-defence; or undermine national arms regulation standards already in place.”

This now sets up a fight between Barack Obama and the Senate that many expected. The Senate has voiced majority opposition to the treaty that has transcended party lines, in some cases, with a number of key democrats opposing the treaty. This treaty must be approved by 67 Senators in order to become law in the United States.

The most notable opponent of the treaty domestically has been the NRA. The best explanation of the NRA opposition can be explained in this testimony by Wayne LaPierre.

We are certainly set up for a fight in this country. With the Senate remaining firm in it’s opposition, it remains to be seen what kind of leverage The Obama Administration will use to try to get this Treaty through the Senate.

It’s all politics from here on out.

With growing concerns of where this country is headed we decided to start organizing people across the USA. We are not organizing for armed revolt. We are not a militia. We feel it is wise to get people together with others in their local areas to prepare for the possibility of a “SHTF” situation. If you would like to meet others in your area and grow your own support network, join the group in your area.