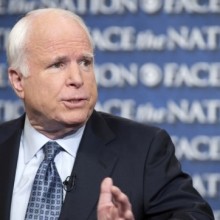 Senator John McCain (R-AZ) once again demonstrated why he should be on his way out when he is up for re-election. On CBS’ Face the Nation on Sunday, McCain expressed bewilderment over the proposed filibuster by Senators Paul, Cruz and Lee over Harry Reid’s gun control legislation. “I don’t understand it,” McCain said. “The purpose of the United States Senate is to debate and to vote and to let the people know where we stand.”

“I don’t understand why United States senators want to block debate when the leaders said we could have amendments,” McCain said.

Well, there is a good reason. Most of the time people are busy engaged in life while RINOs like John McCain and Lindsey Graham sell us out in the Senate. A filibuster, like the one these three senators engaged in previously over the authority of the President to assassinate U.S. citizens on U.S. soil stopped Americans in their tracks to listen to what their government is engaged in and demonstrated how it was a violation of the Constitution and the rights of the people.

The Senate, as well as the House is to uphold the Constitution. Mike Flynn writes, “Originally, the Senate was designed to act as the states’ check on an encroaching federal government. Senators were appointed by state legislatures to be their voice in Washington. The House was designed to be the voice of the people. Sadly, those days are long gone.  Today, Senators are just House members juiced-up on steroids. Worse, they have a habit of putting decorum and the traditions and processes of the institution above foundational principles.”

Applying a filibuster to this debate is in essence an attempt to regain some of that power Senators once wielded to keep in check the Federal government from expanding its power, which McCain has been guilty of allowing to happen. A filibuster won’t fix what is wrong in Washington, but it is a means of exposing those who are corrupt, lazy, and disinterested in doing what the people sent them there to do.

“What are we afraid of? … If this issue is as important as we all think it is, why not take … it up and debate?” McCain said on CBS’ “Face the Nation.” “Everybody wants the same goal to keep the guns out of the hands of criminals and the mentally disabled.”

That is true, but gun control legislation doesn’t do that. It is smoke and mirrors and the people that actually know what the Second Amendment says have already been shown how the trick works so we aren’t fooled, which is why we speak up and people like Sens. Paul, Cruz, and Lee are our voices in the U.S. Senate.

Instead of reading the tea leaves and understanding this is what the people want, Senator McCain along with Lindsey Graham and others are being sidelined, which is good and bold, principled and courageous men are taking the Senate by storm. Personally, I’m glad to see it. It’s good to see some Republicans with backbone stand up to the Democrats and establishment Republicans for the sake of the people. Let’s hope that we can find more like this in the future.

Tim Brown is a frequent contributor to The D.C. Clothesline and Editor of The Freedom Outpost.