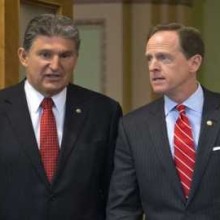 Senators Pat Toomey (R-PA) and Joe Manchin (D-WV) are authoring a “See a Shrink, Lose Your Guns” sell-out bill that Gun Owners of America claims is “worse than the Feinstein gun ban, which will reportedly be tied to it and offered simultaneously in a Senate procedure known as an ‘amendment tree.’” This bill not only is being authored by these guys, but has Senator Chuck Schumer’s (D-NY) fingerprints all over it.

Toomey and Manchin will claim that their bill only covers “gun show sales” and Internet sales. However, if you’ve ever talked about your gun and /or let it be known you’d like to sell or buy a gun on the Internet, this language covers you. If you advertise your gun in the church bulletin and the bulletin is put on the Internet, you’re covered.

The only exemption is for sales that are sold exclusively by word of mouth. The increased number of background checks would likely exacerbate the system breakdowns (inherent to NICS) which have shut down gun shows over and over again. It would mean that Americans who were illegally denied firearms because their names were similar to other people would effectively be barred from owning a gun. (We would never tolerate such delays for voting rights or other freedoms that we are guaranteed.)

For Republicans who think they’re going to be able to offer their useless amendments, guess what? Reid is reportedly going to use an amendment tree to block out all amendments. And there are plenty of Senators standing in line to make sure that the Senate doesn’t give “unanimous consent” to set that blocking effort aside.

If you live in a rural area, you’re effectively barred from selling or buying a gun or it at least becomes very, very difficult.

Although the press release issued by Manchin and Toomey explicitly states that the bill will not create a national registry and makes it illegal to establish one, Guns Saving Lives points out:

“If transfers are done through a federally licensed firearms dealer there WILL be a form 4473 for every single transaction. These forms must be turned over to the government whenever a dealer changes owners or closes its doors. The ATF can also inspect these forms almost at will. This will create a de facto gun registry through the records that will be generated.”

Not only that, but the bill’s “national registry” language is full of holes. Because of this sell-out, there will most definitely be a national gun registry.

However, things gets worse. Under an amendment in the bill to HIPAA, your guns could be taken away because your private psychiatrist thinks you are dangerous and sends your name directly to the FBI Instant Check system. In other words, if you were offended because of 150,000 military veterans were added to the NICS system because they had PTSD, then this should really anger you since this will far surpass veterans to include you and me.

No doubt the next step will be to criminalize shrinks that don’t make such a report. All of this will come under the amendment tree with the Feinstein gun ban and magazines ban.

In addition, Toomey no doubt unintentionally agreed to repeal one of the most important protections for gun owners that was included in the 1986 McClure-Volkmer Act – the provision that would allow you to take an unloaded, locked-up gun through states like New York without being stopped. Under a new subsection (c), the Toomey-Manchin bill would require you to “demonstrate” to the satisfaction of New York police where you were coming from and where you are going to. And, if you don’t do that to their satisfaction, they can arrest you.

We are told that these measures are put in place to prevent tragedies like the Sandy Hook shooting. Pray tell, what in this unconstitutional, treasonous legislation would have prevented it or any other shooting? Not one thing!

It is not surprising the Joe Manchin is pushing for this kind of thing, seeing as reports came out that he was meeting with the National Rifle Association (NRA) concerning broadening background checks recently. In fact, both of these men have an “A” rating from the NRA!

“But nobody here, and I mean not one of us in this great Capitol of ours with a good conscience, could sit by and not try to prevent a day like that from happening again,” Manchin said. “And I think that’s what we’re doing.”

“This agreement is a big step forward, and we commend Senators Manchin and Toomey for working across the aisle on legislation that will expand our current background check system,” the two said in a joint statement. “Background checks on firearm purchases are the first line of defense against criminals and the dangerously mentally ill getting guns. This legislation is enforceable, it will save lives, and it respects the Second Amendment rights of law-abiding Americans.”

Let’s make these Senators prove their words. This legislation will do nothing but infringe on the rights of law abiding citizens, period. It will not save one life, but it will violate the Constitution.

Following statements from the Senators, the NRA released a statement blasting the expanse of background checks.

“While the overwhelming rejection of President Obama and Mayor [Michael] Bloomberg’s ‘universal’ background check agenda is a positive development, we have a broken mental health system that is not going to be fixed with more background checks at gun shows,” the statement reads.

If the NRA really believes this, I’d say it’s high time to rerate both of these men with an “F.”

People listen. John McCain, Lindsey Graham, Pat Toomey and the rest of the Washington crowd that capitulates to the Socialists in Washington are traitors to the U.S. Constitution. They are not upholding their oath of office and frankly they need to be removed and tried for what they are engaging in. What is even more egregious is that John McCain was considered a war hero in the Vietnam era. Now he is a Judas to every Vietnam veteran living today, just as Jane “Hanoi” Fonda was back then.

We must support the Rand Paul, Ted Cruz, Mike Lee filibuster on this issue. We must flood the offices of our representatives with faxes, emails and phone calls until they hear us. If they do not listen, they are looking to provoke Americans towards Revolution, and not the peaceful kind. I for one desire peaceful resolution, but this bunch of cowards, who don’t want the people to know what they are doing to them cannot be tolerated. We must be heard on the issue.

Contact your Senator today and demand that they oppose any and all gun control legislation in the U.S. Senate, including this newest measure by Sens. Pat Toomey and Joe Manchin.

Tim Brown is a Christian, a Father of 10 wonderful children and a lover of liberty. He is also the Editor of Freedom Outpost and a frequent contributor to The D.C. Clothesline.