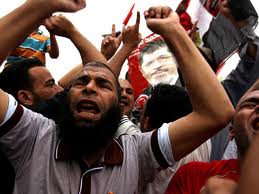 How many Coptic Egyptian Christians have to die before you take action?

WASHINGTON and LOS ANGELES, April 11, 2013 /PRNewswire-USNewswire/ — What has been described as the Arab Spring has evolved into deadly seasons, especially for the original Christian inhabitants of these lands.  The dictators who once ruled these countries are being replaced by militant Islamic regimes that are bent on cleansing their nations from all Christians.

Not a day passes in Egypt without Christian homes, businesses and churches burnt to the ground.  Members of the Christian minority are wounded and killed.  It is common for their children to be kidnapped for ransom or for coerced conversion to Islam.  In village after village, militant Muslims drive Christians from their homes and businesses, where they have lived for generations.

A recent atrocity in Egypt exemplifies violence unprecedented in modern history.  On Sunday, April 7, 2013, a funeral service was held at St Mark’s Coptic Cathedral for the victims of Muslim violence in the village of Al Khosous.   As the four coffins were carried from the church, Islamic mobs attacked the mourners throwing rocks, grenades, tear gas and fire bombs, killing two more Christians and wounding dozens.  The mob also attacked the Cathedral compound which includes the headquarters of the Coptic Papacy and residence of the Pope. Police took more than an hour to respond, and when they arrived, they did nothing to stop the attack. There are reports that some officers actually fired tear gas grenades into the Cathedral.   The symbolic ramifications of these acts are frightening.

The United States shares responsibility for what is happening to Egypt’s Christians.  The USA encouraged the takeover ofEgypt by the Muslim Brotherhood with full knowledge that the organization has a history of violence and bloodshed.  The United States has a powerful bargaining tool to help stop the violence.  It gives Egypt 2 Billion Dollars annually in foreign aid.  The President and Congress should make it known that the funding is at risk unless a quick peaceful solution is found for the plight of The Coptic Christians of Egypt.

President Obama: What is happening to the Copts of Egypt is unjust and inhumane.  Please help stop the tragedy.

A peaceful demonstration will be held in front of the White House, at Pennsylvania Ave. main gate, on Thursday, April 18, 2013, from noon to 2:00 p.m., followed by a March to Congress/Capitol Hill via Pennsylvania Ave.