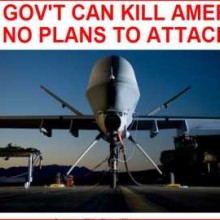 In a letter to Barack Obama, House Judiciary Committee Chairman Bob Goodlatte (R-VA) and ranking member John Conyers (D-MI) are threatening to subpoena the Obama administraton for access to its legal justification for killing U.S. citizens who are suspected as terrorists. The two congressmen are demanding that plans to view the documents be finalized by Thursday evening or they will issue a subpoena.

The panel requested access to the Office of Legal Counsel (OLC) memos more than two months ago. These memos allegedly lay out legal support to target U.S. citizens who are suspected of being terrorists, that pose an “imminent threat” to national security and for whom capture is not an option.

“If arrangements for our review of these materials are not finalized by COB tomorrow (Thursday, April 11, 2013), the committee will have no choice but to move forward with issuance of subpoenas for the documents,” wrote Goodlatte and Conyers.

On Wednesday, the administration allowed members of the Senate Judiciary Committee to view some of the memos, after the panel’s chairman, Sen. Patrick Leahy (D-Vt.), had waged a similar campaign for access to them, telling Attorney General Eric Holder that he would consider issuing a subpoena if left with no other alternative.

Both Judiciary committees have fought to gain access to the memos since February, arguing that they are tasked with overseeing the Justice Department (DOJ) and have a congressional right to see the legal analysis.

Until recently, the administration had only provided the OLC memos to the House and Senate Intelligence committees, which it did ahead of a hearing to consider confirming John Brennan as director of the CIA.

“Members of the House and Senate Intelligence Committees have been provided an opportunity to review at least some of these opinions,” wrote the congressmen on Wednesday.

“Today, members of the Senate Judiciary Committee were also given access to some, but not all, of the documents that we have requested,” they continued. “There is no reason why a similar bipartisan request from the House Judiciary Committee continues to go unanswered.”

All of this is tied to the confidential Justice Department memo which read in part, “The condition that an operational leader present an ‘imminent’ threat of violent attack against the United States does not require the United States to have clear evidence that a specific attack on U.S. persons and interests will take place in the immediate future.”

Concern over the targeting of American citizens was made even more public when Senator Rand Paul (R-KY) conducted a filibuster to raise the American people’s awareness of the domestic threat they possibly face from the Executive Branch. That finally resulted in an answer of sorts from the Obama Justice Department.

Specifically, concerns were raised after the drone strike that resulted in the death of Anwar al-Awlaki, who is alleged to have incited attacks against the U.S., including the Ft. Hood shooting, the alleged “underwear bomber” and the failed Times Square bombing in 2010. Interestingly enough, al-Awlaki spoke at the Pentagon just months prior to his assassination by the U.S. government. Al-awlaki’s son also perished in a drone strike shortly after his father. No evidence of terrorism has been forthcoming in his death, but former White House Press Secretary Robert Gibbs callously said that he should have had a “more responsible father.”

Rep. Peter King (R-NY), who served as the Chairman of the House Homeland Security Committee, isn’t worried at all about drone strikes. In fact, he says that Barack Obama’s “kill list” is “totally right” and “totally constitutional.” When asked about the murder of 16 year old U.S. citizen all King could say was, “that’s the breaks.”

The Senate Judiciary Committee’s was to get access to the memos on Wednesday. The panel’s Constitution, Civil Rights and Human Rights subcommittee announced plans to hold a hearing next week on “Drone Wars: The Constitutional and Counterterrorism Implications of Targeted Killing.”

EmptyWheel makes a great point and provides a useful timeline:

What’s particularly amusing about this response to the White House’s continued refusal to permit HJC to oversee DOJ is the scope of HJC’s request: Since last December, they’ve been asking for the broader backup, including the memos authorizing signature strikes explicitly. As a result, the Administration’s refusal to share even what they’ve shared with the other oversight committees puts that signature strike request on the subpoena table where it otherwise might not be.

Given Jonathan Landay’s reporting showing the extent not just of strikes where we don’t know the target’s identity, but also the number of side payment strikes we’re conducting, seeing such memos are even more urgent.

I’m guessing the timing gives the White House new-found interest in negotiating sharing those other memos.

Tim Brown is a frequent contributor to The D.C. Clothesline and Editor of Freedom Outpost. Visit Freedom Outpost for more great articles from Tim and other conservative authors.