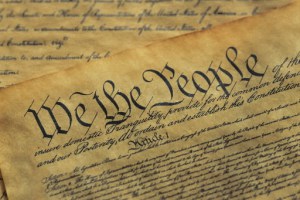 How would you define an extremist? To me, an extremist must be a person who takes a view or belief excessively beyond the commonly held position. In politics, both liberals and conservatives lob the term back and forth. And like everything else, they muck up the meaning of word. It stands to reason then that there must be a putative position. For our country, the standard is (or should be) built upon the ideas embodied in the Declaration of Independence and Constitution. So who then is the extremist? Is it the person who believes in the principles of the Constitution? Or is the person who seeks to corrupt and pervert those principles?

Admittedly, there have been some necessary, hard-fought battles along the way. The vast majority of Americans now understand that “All Men Are Created Equal” means all human beings, irrespective of gender, color, or creed. With that understanding, those documents have not changed in their principles. It is our society that has changed to accept the fullness of those ideals meaning. Life, liberty, and the pursuit of happiness are indeed the birthrights of each citizen of the Republic.

If we begin with an understanding that these principles are the framework, then it stands to reason that anything that follows merely adds to its structure. However, if you take away from that framework, you run the risk of collapsing the structure. The Constitution is rightly a malleable document, but it must retain its core principles to exist.

For decades our society has been fracturing over issues that are very personal; racial equality, religious expression, abortion, gay marriage, or immigration to name a few. Many of these topics have been fueled by politicians who benefit from our division. This article is not intended to discuss the specifics of these or any other divisive issue. Rather, I think about the framework which predicated the idea that is America. Specifically, whether these issues necessarily must divide us, or may we find a common ground?

Bearing in mind that the Constitution does not guarantee a right from being offended, we must learn to accept that there are others whose views differ from our own. Having said that, we must also accept that we have no need, nor desire, for a Government whose function is to legislate the breadth and depth of our lives. From cradle to grave, the politicians have foisted the Government into every aspect of our lives, which does not conform to the framework of the Constitution.

It is a rather extreme view to believe we need a Government that provides for our every need. The American spirit has always been that of self-starting, hard-working, adventuresome people. That spirit has been dampened by the nanny-state, which is just another form of indentured servitude. Like moths to a flame, people are drawn to the false light that is the welfare state, which in reality only offers atrophy to the point of the American spirit dying entirely.

There are plenty of patriotic folks whose personal choices do not conform to my own. For me, I am okay with that so long as those choices do not violate the principles of the Constitution; Justice, Life, Liberty, and Pursuit of Happiness most importantly. We are seeing the first blush of totalitarianism in our nation, is it truly important that we fight now among ourselves?

The extremists are those that remove themselves from the common view, which is beheld in the Constitution. The powerful that seek to destroy our common view can only be seen as extremists. United we shall be the rock upon which extremism would be torn asunder, divided we shall fall into a ruinous, contemptible nature.

Let us put aside that which divides and find commonality! Fear not those ideas that make us unique! Unite then, shoulder to shoulder and declare we will not willingly accept the yoke of oppression! Believe, all you Patriots, that the Constitution was created to establish a free land where you might prosper, secure in your Life, Liberty, and your Pursuit of Happiness!

Anthony is the Publisher of The Radical Middle. Please visit his site to read more of his articles.