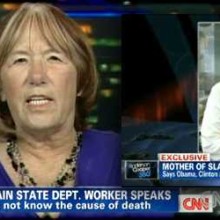 On Wednesday, Congressman Frank Wolf (R-VA) received a passionate plea from Patricia Smith, mother of fallen information management officer Sean Smith, who was killed during the September 11, 2012 attack in Benghazi, Libya. In her phone call to the congressman she expressed her support of H. Res 36, a House Select Committee to investigate the attack and the Obama administration’s response. She also followed up her conversation with a letter. The timing of the letter is particularly noteworthy seeing that today is the seven month anniversary of the attack in Benghazi that took the life of her son and three other Americans, including the U.S. ambassador.

This letter is to endorse resolution H. Res. 36 to create a Select Committee to investigate the Benghazi attacks.

I am the mother of Sean Smith, one of the four people murdered in Benghazi by terrorists along with ambassador Chris Stevens and ex-seals Ty Woods and Glen Daugherty.  When I was in Wash. DC at the reception of the caskets, I asked for and received promises from Pres. Obama, Hillary Clinton, Leon Panetta, VP Biden and several other dignitaries in attendance.  They all looked me directly in the eyes and promised they would find out and let me know.  I got only one call from a clerk about a month later quoting from the time line, which I already had.

I agree completely with items 1 thru 16 of this resolution.  I especially want to know WHY the four were abandoned the way they were.  My son told me that he saw someone taking pictures just before this happened and reported it.  He told me they asked repeatedly for better security.

Please, Please help me find out who is responsible and fix it so no more of our sons & daughters are abandoned by the country they love.  It is very difficult to find out Leon Panetta advised Pres. Obama that the attack was occurring and Pres. Obama went to bed without sending help.  It is too late for my son but not too late for those that follow.

I have been following John McCain and Lindsay Graham hoping they had the ability to get some answers but no luck.  Hillary finally testified but didn’t answer the questions (i.e. If they were watching this happen in real time, why wasn’t help sent).

Ps  Sean was in Special Operations in Okinawa before joining the State Dept.

If you are like me, you feel like Mrs. Smith has been slapped in the face by the Obama administration (former and current). She and the American people have been unable to get answers from Democrats and several Republicans, even when they called witnesses such as former Secretary of State Hillary Clinton to testify before the Senate.

Mrs. Smith, the families of the other victims and the survivors, along with the rest of the United States and the world deserve to know what happened in Benghazi and why. There also needs to be a move to bring those responsible and those complicit in the attacks to justice.

Contact your representatives and urge them to get on board with this resolution and get it to the floor of the House and passed so that this investigation can be conducted, questions can be answered and those responsible can be held accountable.