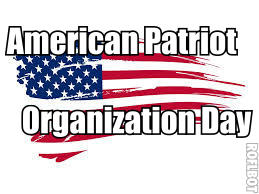 I know what many of you are already thinking. Alan Moore didn’t say that, Thomas Jefferson did. Well, not exactly true. The similar Jefferson quote has never been verified. Did he say it? Possibly. Did he believe the concept? Without a doubt. Thomas Jefferson not only believed it. He lived it.

He was one of 56 bold men who signed “The Declaration of Independence.” This document, surprisingly, has no signatures that read “Anonymous.”

I can not blame people for being a little apprehensive now. I put nothing past this government. I heard a rumor a few weeks ago that I was going to be arrested. Of course I believed it because I am one of the biggest critics of this administration. It turns out that it was a few people who don’t like what I stand for and they were trying to rattle my cage. The point is that they wanted me to cower in fear, just as millions of Americans are currently doing.

I can not do that. Am I scared? Of course I am. I know that a lot of people would not want me to say that. They would rather I put on this grand facade of a great leader who is calling Patriots to follow me into battle. I am not a leader and I am trying to avoid bloodshed, not create it. I am simply a concerned American who is not afraid to speak out.

The fact that people are hiding is exactly how the government continues to get away with dismantling our liberties which are supposed to be protected by our great constitution. Those who hide are silent and silence strikes fear in no one. We saw an example two days ago. The Senate seems poised to send Manchin-Toomey to the House.

Forget the 2nd Amendment for a moment. Did you know that Manchin-Toomey violates a number of other constitutional provisions? The biggest is the simple fact that this Bill should have never originated in the Senate. The House of Representatives is required by “the origination clause” to introduce any revenue Bills. That is clearly written in our constitution. Since background checks require a fee, this is legally a tax and that can not be proposed in the Senate. It has to start in the House. The House now has a constitutional responsibility to reject this legislation should it pass through the Senate which is almost a foregone conclusion.

Will it make a difference? Well Steve Stockman has vowed to block it with a blue slip resolution for the very reason I just described…but will his fellow House Reps listen?

The problem is that no one has to listen when no one is talking. Steve Stockman can be dismissed as a radical congressman from Texas’ 36th District and they may laugh at him. Why? Because very few have the guts to have his back.

That is why they can call us “potential terrorists.” We are potential terrorists because we are willing to say what 50% of this country is thinking, but too afraid to say. We are sick of seeing our freedoms taken away, systematically, one by one, and we have to take a stand.

Why? Because no one else seems to be willing. We have no choice.

Until more and more and more people get louder and louder this government has no real reason to fear us. And honestly we do have reason to fear them if we remain silent. Let us not forget that the DHS has ordered 1.6 billion rounds of ammo and still not bothered to give an explanation. A significant percentage of that is “hollow point” ammo that is not allowed in international conflict, but it can be used on you.

The DHS is holding 5 bullets with your name on them. They are doing the same for every man, woman and child in this country.

Can we continue to remain silent and hope these problems go away?

Today I am sounding a call to action to those who are sick of remaining silent. We are not planning any offensive revolts but we are preparing people for the possibility of bad days ahead. We will not strike first but we will be prepared to defend ourselves should things come to that.

If you want to continue to hide then you are part of the problem and not part of the solution. 25,000+ people have already come out of hiding to join us. Are you willing to stand with us?

This is a multi-day, ongoing event… Click here to join us at “American Patriot Organization Day” and make contact with people in your area who will have your back if things take a turn for the worse.

God Bless America and its People.