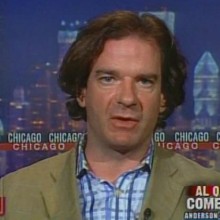 In another shameful display of utter ignorance and desperation to cover over what will obviously be shown to be a Muslim Jihadist orchestrated bombing, CNN “national security” analyst Peter Bergen spewed forth the same kind of non-sense that occurs when things like the explosions at the Boston Marathon take place. He told CNN anchor Jake Tapper that it could be “right-wing extremists.”

[youtube]http://www.youtube.com/watch?v=8_RocLG-Gdk[/youtube]
“I’m reminded of Oklahoma City, which was a bombing, which was initially treated as a gas explosion. First reports are often erroneous,” he said.

“Once the device — if it a device — is found;”  he continued, “what kind of explosives were used. So for instance, if it was hydrogen peroxide, this is a signature of al Qaeda. If it was more conventional explosives, which are much harder to get hold of now — that might be some other kind of right-wing extremist. … We’ve also seen, for instance, right-wing groups trying to attack the Martin Luther King parade in Oregon in 2010.”

I completely disagree with Bergen about even talking “right-wing extremists,” just like I disagreed with Nida Khan of the Huffington Post who tweeted:

“We don’t know anything yet of course, but it is tax day & my first thought was all these anti-gov groups, but who knows”

I simply pose that the one thought that should come to Americans’ minds is not “anti-government” groups, whatever that is or “right-wing extremists” but our minds should instantly think Islamic Jihadists. To reference Timothy McVeigh seems ridiculous. There is so much coverup in the Oklahoma City bombing it’s unreal. But more to the point, whether Americans are going to wake up or not, we are at war with Islam, spiritually, politically and by means of their violence.

Why is it that after the Aurora shooting that the Tea Party was fingered? Why is it that the first reaction is not Jihadists? While Bergen did make reference to al-Qaeda, it seems clear that his first thought was to Timothy McVeigh, not towards Islam.

To be fair to Mr. Bergen, his analysis of explosives and what they are composed of would provide a signature, but it seems that if people are actually paying attention, then the idea of a “right-wing extremist” bombing the Boston Marathon would be one of the last things to enter their mind, unless they were following the Army’s terrorist briefing, or maybe took a FEMA class, or bought into Homeland Security’s indoctrination.

I’m pretty sure though that it isn’t a right wing extremist since they have a Saudi National under guard at a Boston Hospital.

Tim Brown is a regular contributor to The D.C. Clothesline and Editor of the highly-successful and hard-hitting Freedom Outpost.