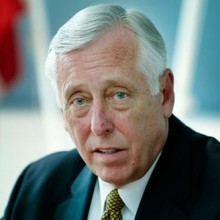 House Minority Whip Steny Hoyer (D-MD) decided to politicize the bombings that took place at the Boston Marathon on Monday, saying that they were “proof” that some of the sequester cuts were “irrational.”

We should have known that this would be forthcoming from a Democrat’s lips and so we are not shocked, but we are most assuredly sickened by Hoyer’s comments.

Hoyer claimed that the bombings demonstrate “why having the ability to dress security concerns is important” and then tied that with cutting off sequestration.

He went on to elaborate when asked by a reporter whether or not the attacks on Monday actually makes an argument that should be directed towards sequestration. He said, “I think there are multiple reasons for ensuring that we invest in our security — both domestic and international security. That we invest in the education of our children. That we invest in growing jobs in America. And don’t pursue an irrational, across-the-board policy of cutting the highest priorities and the lowest priorities essentially the same percentage…. I think this is another proof of that — if proof is needed, which I don’t think frankly it is.”

“I doubt that [sequestration’s] having any impact presently,” he added, “and the reason for that, this is a priority item and I’m sure they’re shifting what resources are necessary. Even if they’re shorter resources than they otherwise would’ve had, I’m sure they’re putting all the resources necessary on this effort. Certainly at the federal level — I think the President’s made that pretty clear.”

Well I think Mr. Hoyer must have a problem, like Barack Obama does in remembering that sequestration was Obama’s idea in the first place and second, that Obama continues to spend millions almost every month on vacations and wasteful government projects, instead of redirecting the funds to cover things he claims are more important. However, we all know what this is about. It’s the political grandstanding that Democrats so often do at the expense of a tragedy. After all, they follow in the footsteps of Rahm Emanuel who declared, “You never want a serious crisis to go to waste.” This is exactly what Hoyer is trying to capitalize on, just like the Socialist Democrats did to push gun control following the shootings in Newtown, Connecticut.