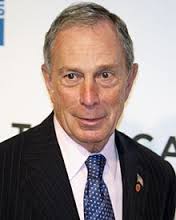 I fully expect the State of New York to start pushing for the legalization of Marijuana for recreational use because it is possible that some of their elected servants may already be under the influence of this drug. By now most have heard that Manchin-Toomey was defeated in the Senate today. Despite a 54-46 vote the legislation was defeated, falling short of the required threshold of 60 votes for passage.

One of the first to spout off about the defeated legislation is New York Mayor Michael Bloomberg. While insistently depriving himself of a refreshing “Big Gulp,” due to health concerns, Mayor Bloomberg issued this statement:

“Today’s vote is a damning indictment of the stranglehold that special interests have on Washington. More than 40 U.S. senators would rather turn their backs on the 90 percent of Americans who support comprehensive background checks than buck the increasingly extremist wing of the gun lobby. Democrats – who are so quick to blame Republicans for our broken gun laws – could not stand united. And Republicans – who are so quick to blame Democrats for not being tough enough on crime – handed criminals a huge victory, by preserving their ability to buy guns illegally at gun shows and online and keeping the illegal trafficking market well-fed. Senators Manchin and Toomey – as well as Majority Leader Reid and Senators Schumer, Kirk, Collins, McCain and others – deserve real credit for coming together around a compromise bill that struck a fair balance, and President Obama and Vice-President Biden deserve credit for their leadership since the Sandy Hook massacre. But even with some bi-partisan support, a common-sense public safety reform died in the U.S. Senate at the hands of those who are more interested in attempting to protect their own political careers – or some false sense of ideological purity – than protecting the lives of innocent Americans. The only silver lining is that we now know who refuses to stand with the 90 percent of Americans – and in 2014, our ever-expanding coalition of supporters will work to make sure that voters don’t forget.”

90% of Americans? Come on Mayor Bloomberg. There is propaganda and then there is “Bloomberg-Propaganda.”

Oh, and by the way… John Mcain and three other Republicans voted for the amendment:

Where do we go from here? My suggestion is to get yourself an ice-cold 44 ounce drink and celebrate the fact that this is still the land of the free.

The good guys won this time.