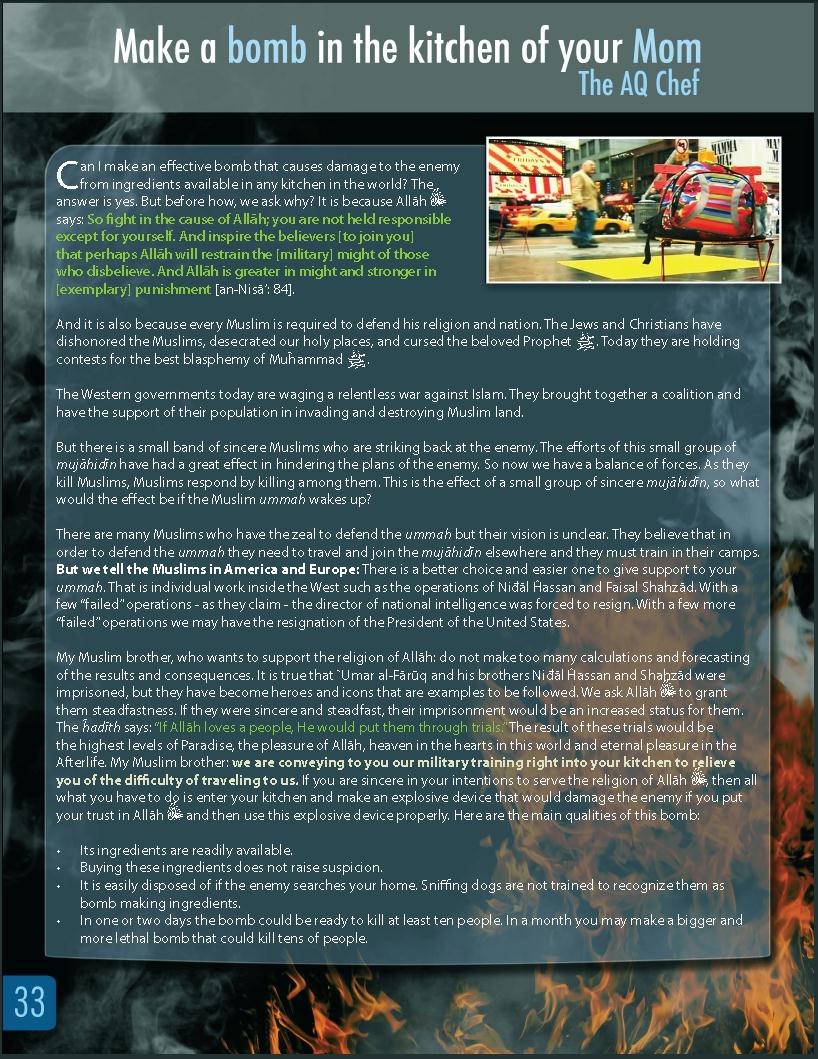 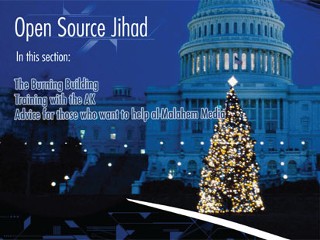 Inspire is an English language online magazine reported to be published by the organization al-Qaeda in the Arabian Peninsula (AQAP). The use of the magazine is to increase the availability of their message without challenges to their value system. The magazine is one of the many ways AQAP uses the Internet to reach its audience. The magazine is also a political warfare tool targeting the American and other Western governments, with the intent of inspiring homegrown terrorism. The tactic is used to generate over-reaction by the governments of its Muslim population with threats of individual jihadist attacks. Since AQAP lacks the ‘Open Front’ capabilities to assault the West, its tactic is to attack the West using covert operations run independently by radicalized individuals. They believe this strategy will eventually lead to an overt open front attack from Islam against the West. The magazine is an important brand-building tool, not just of AQAP, but of all al-Qaeda branches, franchises and affiliates.[2]

What’s going on with the coverage of the Boston bombings? Liberal news media and government officials are pointing fingers to “Right-Wing-Extremists.” There are already correlations being drawn between the Boston bombings and the “ricin” letters that are being received in Washington D.C.

What we are seeing is a bunch of “left-wing-libtards” doing the same thing that extreme-right-wingers are often accused of. They are creating a conspiracy. Shame on you. Let’s gather facts first and build conspiracies later.

Let me offer some actual evidence instead of just a theory. In the Summer of 2010 Al Qaeda’s “Inspire” magazine published an article titled “Make a Bomb in the Kitchen of Your Mom” which may give the exact recipe for the “pressure cooker” bombs that were made to strike Boston. I refuse to print the whole article or even give you a link, but I will print a single page of it as proof. The article goes on to give exact instructions on how to create these “pressure cooker” bombs.

I am not telling anyone to blame Al Qaeda. But I would disrespectfully request that the mainstream liberal media shut their pie holes. Below is one page of the article which appeared in July of 2010. I am a right-winger myself and some people call me a bit “extreme.” I didn’t even know that this publication existed until today. If you want to rush to blame someone, maybe you should first look at the obvious.

So how about those of you at the “Communist News Network” shut your mouths and let the investigators do their jobs. With all of your coverage you are making any future potential cover-ups more difficult.

That’s all I have on this. I am sick of talking about something well in advance of having all the facts, but for the record here is one page from that article which is already more proof than I am seeing in the Mainstream Media.