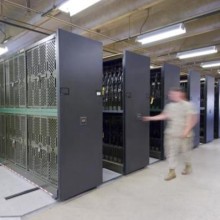 While Barack Obama and the Democrats have been pushing gun control, that has ultimately failed, others on the other side of the world have had their eyes on weapons with U.S. origins. Apparently a cache of 20,000 M16 rifles have been stolen, according to a report.

The Interior Ministry said thieves broke into a warehouse and stole a huge amount of firearms and ammunition. The ministry said 20,000 U.S.-origin M-16 assault rifles and 15,000 rounds for 9mm pistols were stolen.

“There were no guards during the break-in,” the ministry said on April 7.

The ministry said the target was a warehouse of the Interior Ministry in Subiya, Middle East Newsline reported. The statement said thieves broke three doors and removed the entire contents of the warehouse.

Not only was the warehouse, where these weapons kept, unguarded, but a huge cache of ammunition also went with the weapons.

Firearms Talks speculates that the M16s would have been packed in M4 embark boxes (each box containing six rifles) and weighed about 150 pounds. They speculate that it would have taken a football team sized group, working all afternoon, and convoy of vans to have moved 3,000 boxes of these weapons.

Even if the weapons were in racks, that would require then to be able to access the locks or remove them and then you are still talking about hours to remove 20,000 rifles.

These weapons were not owned by the U.S., even though we have some 13,000 troops in the Kuwait area. Apparently they are either military aid or Foreign Military Sales to the government of Kuwait.

Christopher Eger writes, “While Al Qaeda itself is not believed to be operational in the kingdom, a group known as the Peninsula Lions with links to AQ has been active in the country in recent years as has the Iranian backed Generation of Arab Fury. Whether or not these guns were stolen by these groups, tribal-based criminal organizations, or some other new player to the area is currently not known. What is known is that 20,000 M16s are most likely on the underground silk road for those with the scratch and the contacts.”

Another report that came out today indicates that it was 20,000 m-16 rifle rounds and 15,000 9mm pistol rounds that were stolen. The source said that hearing protectors and a printer was also stolen.