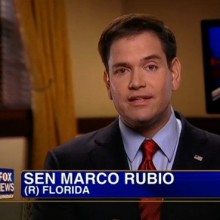 On Wednesday, author Ann Coulter blasted Senator Marco Rubio (R-FL) for his support of the immigration reform bill which is being put forth by the “Gang of Eight” that he is a part of. Her headline was classic Coulter, “IF RUBIO’S AMNESTY IS SO GREAT, WHY IS HE LYING?”. In it, she proceeds to expose the obvious problems with the Florida Senator’s proposed immigration legislation.

“When Republicans start lying like Democrats, you can guess they are pushing an idea that’s bad for America,” the conservative author wrote. “During his William Ginsburg-like tour of the Sunday talk shows last weekend, Sen. Marco Rubio was the Mount Vesuvius of lies about his immigration bill.”

Coulter pointed to Rubio’s appearance on Fox News Sunday, in which he explained the powerful border-enforcing mechanism, which he denied was merely a meaningless goal. He said, “Basically, Homeland Security will have five years to meet that goal. If after five years, Homeland Security has not met that number, it will trigger the Border Commission, who will then take over this issue for them.”

Coulter then sarcastically commented, “So the water torture awaiting the Department of Homeland Security if it fails to secure the border is … ANOTHER GOVERNMENT COMMISSION WILL BE CREATED! Take that, Homeland Security! Ha — we have you now!
The only thing more frightening than ‘another government commission’ is a ‘strongly worded letter.’”

Coulter is correct. I’m sure DHS is quaking in their collective jackboots over the threat that if they don’t meet a demand in five years they will be threatened with another commission that will simply offer rhetoric.

While Rubio claims that his plan isn’t amnesty because “amnesty is anything that says ‘do it illegally, it will be cheaper and easier.’” However, he claims that it’s “cheaper, faster and easier for people to go back home and wait 10 years,” which is what the law requires “than it will be to go through this process that I’ve outlined.”

So wait, if it’s cheaper, faster and easier to do it lawfully, why is he not promoting following the law? Why is he promoting legislation that is basically amnesty by another name, mainly a “path to citizenship.”

Coulter then points out:

Rubio keeps trotting out the canard about the bounty of taxes we’re going to collect from millions more minimum-wage workers when illegals are legalized, stoutly asserting: “In order to keep this legal status, you must be gainfully employed and you must be paying taxes.”

It’s as if he’s talking to someone who has never been to America and is unfamiliar with its tax system.

By “paying taxes,” Rubio means “filing a tax return and getting a payment back from the government in the form of the earned income tax credit.” Another term for what Rubio calls “paying taxes” is “receiving welfare” — which newly legalized illegals will start receiving right away under Rubio’s plan. The only tax they’ll pay is the same tax they pay now: sales tax.

But, incomprehensibly, Rubio swore up and down that the newly legalized illegal immigrants won’t get government benefits: “And then they don’t qualify for any federal benefits. This is an important point. No federal benefits, no food stamps, no welfare, no Obamacare.”

How on Earth does Rubio plan to enforce this “important point”?

So far there is no word on how this will be enforced except through some form of ID verification, which would be an imposition on law abiding Americans as well. That certainly is something we don’t need, more Federal intrusion into our lives by way of our employment.

She also wonders about the children of illegals and points to the insanity of the interpretation of the Fourteenth Amendment that we have been led to believe is true. She writes,

“It seems that, after the Civil War, what the framers of the 14th Amendment had at the top of their agenda was not invalidating the Dred Scott decision and confirming the citizenship of former slaves, but ensuring that, a century hence, the children of any foreigners who manage to sneak into the country illegally and give birth would become full-fledged U.S. citizens.”

All illegal aliens do not fall into the category of Hispanic nor do they all fall into a category of people that are on welfare. However, Coulter points out that Hispanic women have a higher illegitimate birthrate than any other ethnic groups in America, including blacks and that 71% of illegal immigrant households with children collect federal benefits.

She concludes, “If you think Republicans are Hispandering now, wait until the children of 20 million illegal aliens start to vote. Rubio’s amnesty isn’t just bad for America, it’s the end of America.”