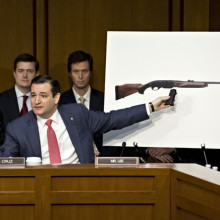 Well this week was a huge win in the Senate against gun control and there are lots of people to thank for the tremendous victory there. First there is you, the American people. You would not be silenced into having this legislation shoved down your throats and you responded overwhelmingly. On a personal level, I thank all of you who passed along information, made calls, emailed and faxed your representatives and for all of you who are a part of Second Amendment organizations who helped get the word out.

First, the New York Times pointed out those in the Second Amendment lobby who should be thanked:

As for the N.R.A., while some saw the group’s leader, Wayne LaPierre, as meandering and on the defense after the Connecticut school shootings in December, seasoned lawmakers heard something far more telling: the group, which once supported new background checks, would no longer abide them. As a result, before a single hearing, bill or speech on the Senate floor, the legislation was in grave trouble. Then the Gun Owners of America chimed in, attacking Republican senators who showed any interest in compromise, arguing that a national gun registry would arise from the bill.

GOA had a tremendous impact according to anti-gun senators.

All three senators that led the charge to filibuster the gun control measure should be thanked as well. These include Senators Rand Paul (R-KY), Ted Cruz(R-TX), and Mike Lee (R-UT).

In addition, Senators John Cronyn (R-TX) and John Thune (R-SD) made impacts as well. While Cornyn is a key player on the Senate Judiciary Committee, Thune is the leader of the Second Amendment Task Force in the Senate. Both offices provided invaluable support in strategizing and marshaling the opposition to Reid’s gun control efforts.

Gun Owners of America came out and even gave thanks to God for the victory, something I think that is very appropriate. GOA wrote,

“Nor should we forget the words of the Declaration of Independence and our “firm reliance on the protection of divine Providence” for His defense of our rights.”

As for other Senators that should receive your support in this matter and a pat on the back for a job well done in voting against the motion to proceed on S. 649 and the vote against the Toomey-Manchin-Schumer amendment, well, there are a list of 31 of them. Here they are:

Please take time to contact these Senators and thank them for their support of the Second Amendment and your ability to carry out your duty before God to keep and bear arms. You can contact them here.

Let me note that we often, and rightly, give them an earful when they do the wrong thing. Let’s take time to send a quick email or make a phone call to say “thank you” for doing the right thing. Remember, in the end it’s people like you that engage in the fight against tyranny that are able to claim the victory and because of your individual efforts and the efforts of your representatives, we were able to defeat a massive attack against the Second Amendment!