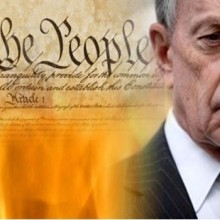 New York City Mayor Michael Bloomberg said Monday that the country’s interpretation of the Constitution will “have to change” to allow for greater security to stave off future attacks.

“The people who are worried about privacy have a legitimate worry,” Mr. Bloomberg said during a press conference in Midtown. “But we live in a complex word where you’re going to have to have a level of security greater than you did back in the olden days, if you will. And our laws and our interpretation of the Constitution, I think, have to change.”

“Look, we live in a very dangerous world. We know there are people who want to take away our freedoms. New Yorkers probably know that as much if not more than anybody else after the terrible tragedy of 9/11,” he continued.

“We have to understand that in the world going forward, we’re going to have more cameras and that kind of stuff. That’s good in some sense, but it’s different from what we are used to,” Bloomberg added.

He then pointed to the gun debate and said the courts have allowed for increasingly stringent regulations in response to ever-more powerful weapons, but the fact is that the courts have yet to really rule on that. That is indeed pending in his own state as legislation such as the NY SAFE Act is being challenged and even nullified in several counties in New York.

“Clearly the Supreme Court has recognized that you have to have different interpretations of the Second Amendment and what it applies to and reasonable gun laws … Here we’re going to to have to live with reasonable levels of security,” he said, referencing the use of magnetometers to detect weapons in schools.

Bloomberg said that the attacks should not be a used as an excuse to go after certain religions or groups of people. I ask why not? Seeing that there is one particular religion which actually promotes such attacks and has been actively involved in over 20,000 such attacks since September 11, 2001? I’m talking about Islam, of course. I think it the height of irresponsibility of any leader in the US to not make that connection and is part of the reason we face what we are facing in this country.

Nanny Bloomberg wants to tell everyone how much they can drink, what they can feed their babies, when and where they can smoke, but he goes all limp-wristed when it comes to real threats to the citizens of his city which hides behind the term “religion” while being actively engaged in war against the American people, both physically and politically.

“What we cant do is let the protection get in the way of us enjoying our freedoms,” he said. “You still want to let people practice their religion, no matter what that religion is. And I think one of the great dangers here is going and categorizing anybody from one religion as a terrorist. That’s not true … That would let the terrorists win. That’s what they want us to do.”

Again, would someone ask Mr. Bloomberg to point out people from other religions who have flown planes into buildings in America, shot up our troops, or bombed marathons other than Islam? That’s what I thought.

Tim Brown is a regular contributor to The D.C. Clothesline and the Editor of the ultra hard-hitting Freedom Outpost.