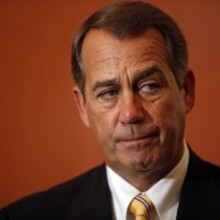 You read that right. Speaker of the House and RINO extraordinaire John Boehner (R-OH) is denying a select committee probe that would investigate the Benghazi attack, even though there is mounting support in the House for doing just that.

We told you earlier that Congressman Frank Wolf (R-VA) put forth a resolution back in January which has gained over 100 supporters in the House of Representatives and that the mother of slain information management officer Sean Smith, Patricia Smith, supports Wolf’s resolution to get to the bottom of the attacks in Benghazi.

However, Boehner defended his position on Monday. “The reason I haven’t called for a select committee yet is that I don’t think it’s risen to that level,” Boehner told Fox News.

“The five committees that have jurisdiction over this matter are working closely together,” said Boehner. “They’re getting the job done.”

The number of supporters of Wolf’s resolution has now climbed to 117.

Boehner has said it would be a waste of time and money. The Hill reports,

Boehner has asked the five committees of jurisdiction to give the conference a progress report on their investigations, The Hill reported last week.

“If, at some point, it’s necessary to have the select committee, I’ll be happy to do it,” he told Fox.

Conservative groups argue the probes by standing committees have been unfocused and are pressuring Boehner to launch the select committee. The special panel’s defenders say it would have extraordinary powers to pry information out of the White House and the State Department, which they accuse of stonewalling.

“It is incumbent upon Speaker John Boehner to take the Benghazi select committee resolution to the House floor now that it has the support of the majority of the majority with 117 co-sponsors that run the ideological spectrum,” said David Bossie, the president of Citizens United, whose campaign has netted more than 5,000 letters to Congress.

Bossie added, “Four Americans were murdered by terrorists over seven months ago and we still do not have any accountability because the various investigations by standing committees have been incomplete and unfocused.”

“We’ll see more of this in the progress report, but we’re going to see more in a way of hearings here,” Boehner said. “This is a progress report. And we’ve got a lot more that we need … to learn about this.”

“I’ve been concerned about this since last September. I don’t think that we’ve gotten to the bottom of what did the State Department know; when did they know it; why they didn’t take action?” he added. “And then, during the attack itself, why weren’t assets brought in? Why wasn’t our government doing more to protect the Americans who were on the ground?”

There is no doubt that it would require money, but that isn’t a concern for this Congress. After all they are helping to pass continuing resolutions, “fiscal cliff” deals and fund the entire implementation of Obamacare. You would think they would consider seriously an attack on a US Ambassador, resulting in four Americans dying a little more seriously. Well some are, but John Boehner seems to be one that is all too eager to quash this resolution despite its support.