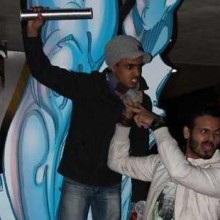 The “person of interest” and suspect in the Boston bombings who was first tackled by bystanders following the bombings and turned over to police and later hospitalized wrote on Saturday on his Facebook page that he is doing well. What’s interesting is that Boston seems to be quite the hot spot for Saudi Nationals as evidenced by their own Facebook page.

Alharbi wrote on Facebook on April 20, “friends, teachers, I just wanna let you know that I am fine, and thanks for everyone who asked about my health.”

His group’s EC Boston Saudi’s Facebook page posted pictures of him with friends in the hospital and those pictures include Michelle Obama visiting him as well. The translation above the picture reads, “Brother Abdul Rahman Al Harbi with Michelle أباما and Asahabh.”

Remember, this is the same guy that was reported to be “in custody” and that was confirmed by two FBI agents, had his file reflect a status of an open “event” which later was altered following a meeting with Saudi officials with Secretary of State John Kerry and Barack Obama and the claim that he was being deported was rescinded.

Oh and when the White House and Homeland Security say that there was no such status as a terrorist according to 212(3)(b), lets remember to remind them what huge liars they are and present them with this:

I’d also like to know why Homeland Secretary Janet “Big Sis” Napolitano didn’t have answers to Representative Jeff Duncan’s (R-SC) questions about the status of Alharbi, and his subsequent deportation status, several days after the bombing took place and Alharbi had been under government’s watchful eye. Her inability to answer the questions put forward to her demonstrate she is an incompetent boob, in my opinion, and she should be summarily removed from her post.

I’m sure some are happy to here the Mr. Alharbi is “fine,” that his health is “OK,” and that for some mysterious reason he got a visit from Michelle Obama, but if you are like me, you are demanding answers to all of this. Furthermore, I would like to know why Ms. Obama didn’t personally visit the injured Americans from the bombing and what makes this guy so important that it would require a visit from Obama.

President George W. Bush’s flying members of the Saudi family out of the country just days after the September 11, 2001 attacks demonstrates a pattern of the Federal government’s ties to the Saudi family that is not merely linked to the current occupant of the White House. In fact, it was more that three years before anyone admitted to clearing the 2001 flights.

Something else that makes me wonder a bit on the Alharbi family name is the fact that back in March, I told you about Mohammed Alharbi and how he, his wife and his three children distributed gifts in a Terre Haute, Indiana elementary school in which they left notes that read, “Mohammed is a prophet of Mercy. Do not defame people, lest you make them your enemies.”

Where should we be looking for the next attack to occur? Indiana? I’m just asking here. The Alharbi family is connected to lots of mosques here in the United States and the Alharbi clan has plenty of active fighters in Al-Qaeda, as well as several members in Gitmo.

If the Alharbi family is going to continue to promote the lies and deception of Islam, then we have a responsibility to not only call them on it, but to see just how deep ties are from Indiana to Boston and throughout out the US.