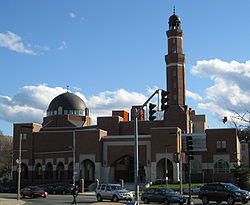 Why is the media so scared to call the Boston tragedy what it is? It appears that once again some very bad people did some very bad things in the name of Allah. Saying that does not make me a bigot. America needs to know the whole truth. America needs to know how deep this corruption may run.  A few days ago we ran an article titled “Why Does Massachusetts Governor Deval Patrick Openly Embrace Radical Islam?” which was written by my friend Tim Brown.

I want you to imagine that your governor went to embrace the likes of Fred Phelps from Westboro Baptist Church. That is what Patrick’s action is akin to. The difference is that American politicians can’t quite get behind the “God Hates Fags” message, but they can get behind this “religion of peace” routine that we see in the mainstream media. As a reminder… Not all Muslims are terrorists but most terrorists are Muslims. That is a fact. So let’s start calling this what it is. This was more than likely an act of jihad by Muslim terrorists.

I want to give you a bit of background before I go on to the new information. Do you think the people of Boston might take this video a little more seriously after the bombings? I would certainly hope so.

Two days after my good friend Tim had the courage to print the truth, USA Today has jumped on the bandwagon. Mosque that Boston suspects attended has radical ties was released late Tuesday so I am betting most people missed it. I want to quote the sections about the known radical ties:

Dzhokhar Tsarnaev and his brother, Tamerlan Tsarnaev, attended the Cambridge mosque for services and are accused of setting two bombs that killed three people and injured at least 264 others at the April 15 Boston Marathon.

The FBI has not indicated that either mosque was involved in any criminal activity, but mosque attendees and officials have been implicated in terrorist activity:

• Alamoudi, who signed the articles of incorporation as the Cambridge mosque’s president, was sentenced to 23 years in federal court in Alexandria, Va., in 2004 for his role as a facilitator in what federal prosecutors called a Libyan assassination plot against then-crown prince Abdullah of Saudi Arabia. Abdullah is now the Saudi king.

• Aafia Siddiqui, who occasionally prayed at the Cambridge mosque, was arrested in Afghanistan in 2008 while in possession of cyanide canisters and plans for a chemical attack in New York City. She tried to grab a rifle while in detention and shot at military officers and FBI agents, for which she was convicted in New York in 2010 and is serving an 86-year sentence.

• Tarek Mehanna, who worshiped at the Cambridge mosque, was sentenced in 2012 to 17 years in prison for conspiring to aid al-Qaeda. Mehanna had traveled to Yemen to seek terrorist training and plotted to use automatic weapons to shoot up a mall in the Boston suburbs, federal investigators in Boston alleged.

• Ahmad Abousamra, the son of a former vice president of the Muslim American Society Boston Abdul-Badi Abousamra, was identified by the FBI as Mehanna’s co-conspirator. He fled to Syria and is wanted by the FBI on charges of providing support to terrorists and conspiracy to kill Americans in a foreign country.

• Jamal Badawi of Canada, a former trustee of the Islamic Society of Boston Trust, which owns both mosques, was named as a non-indicted co-conspirator in the 2007 Holy Land Foundation terrorism trial in Texas over the funneling of money to Hamas, which is the Palestinian wing of the Muslim Brotherhood.

USA Today did not mention that Abdul Rahman Ali Al-Habri attended the same Mosque as the Tsarnaev brothers. So far any potential role in this bombing has been very much covered up by the mainstream media and the federal government. But, let us not forget that six of his family members are among Saudi Arabia’s most wanted terrorists and five more of the Al-Habri clan currently sit in Gitmo.

Let me ask you something. Is this much just like a cross-section of your local place of worship? I don’t know about you, but where I come from we get a lot of recovering drug addicts and former inmates who may have done some bad things in their past. But the point is that they come to our Churches to get better. They don’t learn to do those bad things while attending.

I was elated to see that USA Today had the guts to print this. It’s a shame that I have to give kudos to anyone for printing the truth.

It’s a scary world we live in.