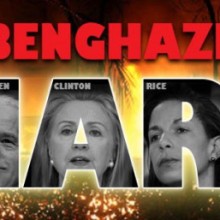 Various aspects of the scandal surrounding the attacks that occurred on September 11, 2012 in Benghazi, Libya have been covered, including the theory that this was an international Fast and Furious and that it was a botched “October Surprise” for Obama. Reports of Paula Broadwell’s stating that there was a secret CIA prison there holds water in all of this too. However, there is a piece of information that has not been focused on and that is the alleged illicit activities transpiring inside the U.S. facilities that were attacked and it is in the midst of a report put out by five committees of the Republican led House of Representatives.

The 46-page report by five committees of the Republican-led House says the White House scrubbed terrorism and al-Qaida from talking points and misled the American public by blaming the attack on an obscure YouTube film.

The report further questions why the White House falsely claimed the U.S. facilities were targeted in unplanned, popular street protests while it was known to the government almost immediately that the Benghazi mission and nearby CIA annex were attacked by militants in a premeditated fashion.

One key question of the congressional probe centers on why the State Department chose to reduce security at the U.S. Benghazi mission and to deny multiple requests for more security assistance.

The report rejects State Department claims that funding was the reason for the security reductions.

House Republicans charged Tuesday that then-Secretary of State Hillary Rodham Clinton rejected a direct plea for additional security for U.S. diplomats in Libya before the fatal attack in Benghazi last year, which Republicans say contradicts her claim in congressional testimony that such requests did not come to her.

Five committees of the Republican-led House concluded in a new report on the attack that cuts in security measures in Libya were approved “at the highest levels of the State Department,” including in at least one instance by Clinton. The report cites an April 2012 internal State Department message, called a cable, bearing Clinton’s signature. The message acknowledged a formal request for the extension of a Marine Corps security detail in the country, but ordered that a planned withdrawal go ahead as planned, the Republican report says.

Many State Department cables routinely go out with the secretary of state’s name, and it was not immediately clear whether this one was personally written by Clinton.

Clinton testified in January that routine requests for security did not come directly to her and that she did not reject or approve them. She was not specifically questioned about the April 19 memo the Republicans cited, but was asked about the decision to withdraw some Marines last year over objection from State Department employees in Libya. She said that sort of request was handled well below her level.

“Senior State Department officials knew that the threat environment in Benghazi was high and that the Benghazi compound was vulnerable and unable to withstand an attack, yet the Department continued to systematically withdraw security personnel,” the report states.

“It is clear that funding – or a lack thereof – is not the reason for the reductions in security, as Deputy Assistant Secretary for Diplomatic Security Lamb testified and as emails reviewed by the Committees attest,” the report states.

“Moreover,” the report continues, “a lack of funding would not have been at issue with respect to the rejection of the request to extend the deployment of the [U.S. Military Security Support Team], as that team was provided via the Defense Department at no expense to the State Department.”

A major accusation in the report claims that the White House put out the talking points to the public that “excluded details about the wide availability of weapons and experienced fighters in Libya, an exacerbating factor that contributed to the lethality of the attacks.”

However, the report does not mention that the weapons or the fighters might be the actual reason for the attacks. According to Middle Easter security officials, what is clear is that the U.S. mission was allegedly used to coordinate arms and aid to, you guessed it, jihadist rebels in both Lybia and Syria. I’m wondering when Barack Obama and his minions will be brought up on charges for aiding and abetting Al-Qaeda in this matter. I’m not holding my breath on this just yet.

The really damning part of the report is as follows. “Senior State Department officials requested — and the White House approved — that the details of the threats, specifics of the previous attacks, and previous warnings be removed to insulate the Department from criticism that it ignored the threat environment in Benghazi,” the report states.

“Evidence rebuts administration claims that the talking points were modified to protect classified information or to protect an investigation by the Federal Bureau of Investigation (FBI),” the report continues.

It also criticizes Barack Obama, saying that he “failed to proactively anticipate the significance of September 11 and provide the Department of Defense with the authority to launch offensive operations beyond self-defense.”

“The failure to respond more assertively to the attacks and to impose meaningful consequences on those who planned and perpetrated them has contributed to a perception of U.S. weakness and retreat,” the report concludes.

The report, distributed to Republican House members on Tuesday, aims in part to inoculate Speaker John Boehner (R-Ohio) and his committee leaders from conservative criticism that they’re giving the Obama administration a free pass on Benghazi by opposing the creation of a select committee endorsed by more than half the Republican conference.

It’s also a first shot at Clinton’s legacy at the State Department as she begins to lay the groundwork for a possible presidential run in 2016.

Democrats are already slamming the report as “politicizing” Benghazi. Even those Democrats who were on the committees claimed they had been excluded from the process. Those Democrats wrote a letter to speaker Boehner, who is no friend of the American people in dismissing a select committee to investigate Benghazi, wrote:

“By abandoning regular order and excluding Democratic Members entirely from this process, you are unnecessarily politicizing our national security and casting aside the system used by the House for generations to avoid making obvious mistakes, errors, and omissions.”

I suggest that national security has been politicized by Barack Obama and his minions in the Democrat Party, along with willing accomplices in the Republican Party. Each of these are concerned with their political power, no the national security of the American people. Think I’m being partisan? Well, I did call out Republicans like John Boehner on this. I’m simply being American on the issue.

Tim Brown is a regular contributor to The D.C. Clothesline and the Editor of the ultra-hard-hitting Freedom Outpost.