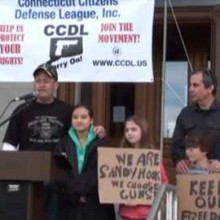 Back in February I told you about the Bill Stevens, the father of a Sandy Hook Elementary student, and his statements to gun grabbing politicians. Stevens received overwhelming support from across the nation for his comments. Well, he’s back and this time his comments came alongside his daughter Victoria at a rally sponsored by the Connecticut Citizens Defense League.

Stevens joked that the lack of resemblance of his little girl was due to his wife being a “legal immigrant” from Japan. The crowd laughed, but there was definitely a good point made while talking about gun owner’s rights.

Victoria Stevens was not harmed in the Sandy Hook shooting, but her father thought it would be good for people to hear from children who are pro-gun and so, he provided the platform for his little girl to speak.

When Stevens asked his daughter if she felt safer with her armed father versus a school in lock down with unarmed teachers, Victoria replied, “Obviously with my Dad.”

Applause erupted to her confident statement and of course she beamed from ear to ear.

“The teachers don’t know how to protect us, really,” she added.

“I’d just like to say that there are a lot of law-abiding gun owners in Newtown who are sick and very darned tired of politicians using the tragedy in our town to promote a political agenda,” Stevens told the crowd.

He then turned his comment to Governor Dan Malloy and said, “If you want to take my guns away, why don’t you come to my house and take it.”

We need more men, more fathers to stand up like this, not behind their computers, but openly and declare to these politician that we are not going quietly into the night, but rather we will oppose them at every front, politically, in writing, with our voices and if need be in armed defense of the rights, yea, the duties and responsibilities God has given us to protect ourselves, our families, and our communities. May God grant us such men in the dark days ahead.