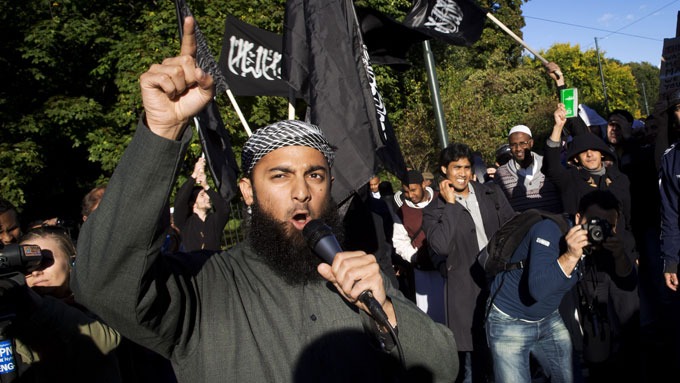 Below is a translated version of an article entitled Norwegian extremists shelves Boston terrorists that appeared on Norwegian News site www.tv2.no I wanted to try to get this out to you because I think it’s very important to see our situation from a world view at times. There are Muslim Extremists all over the world and sometimes you get a more accurate depiction of the world’s view from sources other than the American Mainstream Media. This is just a small slice of that world view but I think it is crucial to understand it, if you want to understand the overall picture. -Dean Garrison

“May Allah SWT reward them,” writes the head of the Prophet’s Ummah. Brothers are behind the bombs during the Boston Marathon.

The Prophet’s Ummah has repeatedly, publicly praised terrorist acts carried out abroad. Also terrorist attack in Boston on Monday hailed now by the leader of the extreme Norwegian group.

On his facebook page Ubaydullah Hussain he posts among others, ‘To hell with Boston and the U.S., and may Allah destroy America.”

Prophet’s Ummah leader has also posted pictures of terrorists on their profile and call the brothers a pair of “real lions.”

Ubaydullah Hussain believes terrorist attacks in Boston are negligible compared to the U.S. war abroad. In an email to TV2.no he writes:

“This small attack can not be compared with the USA’s war against other nations that have lasted over decades. Their cowardly drone attacks and torture against our brothers, sisters and children is reprehensible. Why has not the Western society and the Western media focused on this? Beyond this I have no comment. “ After the bomb attack that killed three people and injured more than 170 people, both endorsements and conflicting opinions were divided on social media.

People offered support especially for eight-year-old Martin, who died in the terrorist attack.

But although support statements have flocked to social media, are also some reminders from people who have experienced equally senseless loss. Twitter users pointed out that 37 people died in Iraq after several bomb attacks in connection with the election.

Both Afghanistan and Iraq are inflamed areas after the US-led military operations. From the same countries are also less supportive messages from people who remember the war that followed the American troops.

“This happens every day in Iraq, and now the United States thinks that we should pray for them?” The twitter user loaded a photo montage of dead, maimed or severely injured children.

Another twitter user asked, “do you remember when the United States dropped white phosphorus over Iraq and Palestine?”

Along with the tweet, he posted a grieving man holding his dead child in her hands.

TV 2 has previously revealed that several of the extremist Islamists in Norway are heavy criminals who have served sentences for crimes ranging from robbery to drug charges.

The controversial Islamic group Prophet’s Ummah, is one of those groups that have extremist Islamist beliefs. Among other things, the group’s leader Ubaydullah Hussain sat in custody for threats against two journalists and the Jewish community.

Ubaydullah Hussain’s real name is Arslan Maroof Hussain, and he is an avid Facebook user. He also spearheaded a small group of Islamists who on several occasions have participated in demonstrations in Oslo.

Editor’s Note: I translated this the best I could. I do not speak the language, but with the help of software and some common sense I think this is fairly accurate. -Dean Garrison