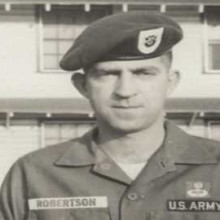 Many of our brave men and women in uniform carry a motto that they will not leave a man behind. Sadly, in many instances that happens and it’s not because that is what those men want to happen. Such is the story of Special Forces Green Beret Master Sgt. John Hartley Robertson, whose helicopter was shot down over Laos in 1968 on a classified mission. He was declared dead in that same year. A new movie by Emmy-winning Edmonton Filmmaker Michael Jorgensen titled Unclaimed is Robertson’s story.

Robertson never forgot that he was a husband, a father and an American soldier who was born in Alabama. However, he did forget English and learned to speak only Vietnamese.

Robertson was captured by the Vietnamese and was accused of being a CIA spy. As a result, he was tortured for a year. He was badly injured and confused, but finally released and ended up marrying a Vietnamese nurse that had taken care of him during his captivity. The two had children and he assumed the name of her dead husband.

Jorgensen says that audiences will “lose their minds” and “come unglued” when they see Unclaimed. “They don’t hold anything higher than service to the country,” he said.

Ironically, Jorgensen said that there were roadblocks from the military in making the film, especially in contacting Mr. Robertson’s family. One high-placed government source told him, “It’s not that the Vietnamese won’t let him (Robertson) go; it’s that our government doesn’t want him.”

Unclaimed follows the dramatic quest of Vietnam vet Tom Faunce to prove that the man he was told about while on a 2008 humanitarian mission in Southeast Asia was indeed an Army “brother” who had been listed as killed in action and subsequently forgotten.

Faunce, a soft-spoken man who has suffered crushing loss and turmoil throughout his life, has devoted himself to helping the world’s most desperate people. He was determined to make good on his vow to leave no man behind after serving two years in a war that divided America and made him feel like a pariah when he finally came home.

“Tom went to meet him (Robertson) and was very skeptical, grilled this guy up and down trying to get him to break, to say, ‘Oh, no, I’m just making it up.’ And he was adamant he was that guy,” said Jorgensen, who was in Toronto to help host an invitation-only patrons’ screening ofUnclaimed at the Hot Docs Bloor Cinema two weeks ago and sat down for an exclusive interview with the Star.

Robertson’s story seems unbelievable. And Jorgensen was equally skeptical when Faunce contacted him in 2012 about making a doc in the hope it would add muscle to his quest to reunite Robertson with his American family.

The film is complete with a touching meeting of Robertson and a soldier he had trained in 1960 and also a very moving scene when he is reunited with his only surviving sibling, 80 year old Jean Robertson-Holly, who had no idea that her brother could even be alive.

According to Jorgensen, “Jean says … ‘There’s no question. I was certain it was him in the video, but when I held his head in my hands and looked in his eyes, there was no question that was my brother.”

Both the soldier and the sister claimed there was no need of verifying fingerprints and DNA because they knew him at first sight. However, attempts were made to have DNA testing with his American wife and two children, but though they had previously agreed, they abruptly declined.

“Somebody suggested to me maybe that’s (because) the daughters don’t want to know if it’s him. It’s kind of like, that was an ugly war. It was a long time ago. We just want it to go away,” says Jorgensen. “I don’t know. What would compel you not to want to know if this person is your biological father?”

Hugh Tran, a Vietnam-born Edmonton senior police constable, was with Jorgensen to act as a translator between him and Robertson. He could find no evidence of an American accent at all. “To tell you the truth, after I interviewed him the first time, I was 90 percent sure he is MIA,” said Trans. “I still didn’t believe . . . until I saw the family reunion.”

Though Robertson appears to forget his birthday and even the names of his American children, Jorgensen says that there are moments that were not in the film where his memory is quite sharp. “These memories pop out,” says Jorgensen. “I’ll give you an example that’s not in the movie. The minute he (Robertson) walks in that room in Edmonton, he knows it’s Jean. He says to Henry, her husband, ‘Oh, I remember, you worked in the drugstore.’” Jean’s husband had been a pharmacist for 50 years.

Both Jean and her husband want answers as to why he was left in Vietnam. They were both involved in a car crash within days of their reunion with Robertson.

Mr. Robertson is back in Vietnam now, having fulfilled a long awaited wish to see his American family one more time before he dies.

When I think of men like John Kerry being promoted to Secretary of State after the treasonous actions that he engaged in and the politicizing of his “service” in Vietnam in his presidential bid and I compare him to someone like Mr. Robertson, I genuinely am disgusted with how such a man could ever be seen as anything but a coward. Perhaps if enough people were to flood the U.S. State Department on behalf of Robertson’s sister and brother-in-law, the pressure might be enough to get some answers for this family that were separated by nearly a half a century.

Unclaimed is scheduled to be screened at the G.I. Film Festival in Washington, D.C. in May. Please visit the Unclaimed website or take the time to introduce this generation to what men like Mr. Robertson and many in this audience have endured in the service of their country.