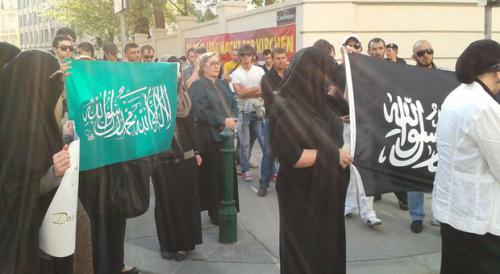 Editor’s Note: This Article appeared in German on the Kurier website. Below is a rough translation. Yesterday we published an article that detailed the outrage of Norwegian Muslim extremists. I want to consistently include more articles like this because I feel like Americans do not always get a real world view of the news. Below is a loose translation of the article courtesy of Jihadwatch.org

Around 40 people demonstrated for the Boston bombers.

Vienna Chechens called upon their compatriots via Facebook to protest outside the U.S. Embassy. They demanded solidarity for the Boston bombers, and solidarity for Muslims and Chechens, because of allegations that the FBI had falsified evidence against the brothers. The “Pro-Tsarnaev” Rally had called for the demonstration via Facebook.

The police went in the afternoon, and assumed that the demo would remain on a small scale. Roadblocks were not planned.

Finally, about 4:30PM, around 40 peaceful demonstrators marched toward a large contingent of police. Men and women demonstrated separately. Among the protesters were both female veil wearers and women in Western dress.

“We are convinced of the innocence of our brother. There is no evidence that he is guilty. America needs a new enemy,” read the Chechens’ signs….

Editor’s note: If you want to see another article about Muslim reactions abroad, check out Norwegian Extremist Says “To Hell with Boston and the U.S. and May Allah Destroy America Thanks for reading the Clothesline. -Dean Garrison