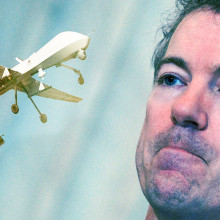 Senator Rand Paul (R-KY) gathered a huge following after his 13 hour filibuster regarding drones and the Constitution, which ultimately got an answer from the Obama administration, sort of. On Tuesday the Kentucky Senator provided a written testimony to the Senate Judiciary Subcommittee on the Constitution, Civil Rights and Human Rights, regarding “Drone Wars: the Constitutional and Counterterrorism Implications of Targeted Killings.”

In his written testimony, Paul stated that the point of his filibuster “was about the proper role of the Federal Government. The point was whether the Constitution still mattered.”

“If the Fourth and Fifth Amendments do matter,” he wrote, “there was only one possible answer to my question: ‘No, the President cannot assassinate an American on American soil without due process.’ Needless to say, it took me a long time to get that answer. Even during a 13-hour-filibuster, I was never certain I would get that answer.”

Paul even wrote concerning the merits of drone technology while he warned against the potential, and I would add “already a reality,” misuse of drones. “Today, we are here not to condemn the use of drones in a general sense,” wrote Paul. “Drone technology certainly has its merits and has been useful against our enemies. But the potential for the misuse of drones, or lack of foresight in using them as a general policy-at home or even on the battlefield against terror suspects-raises important constitutional and national security concerns.”

He specifically pointed to Barack Obama’s kill list, writing “We now know that the President has a kill list, which has already included American citizens, such as terror suspect Anwar al-Awlaki. But even overseas, even traitors deserve some due process if they are American citizens, particularly if they are not actively involved in combat. If he was actively engaged in combat against our soldiers, there would’ve been no question-you take him out. But he was riding in a vehicle nowhere near American troops when he was killed.” Remember, Paul was filibustering Obama nominee John Brennan, a Muslim convert, as head of the CIA and the first ever appointed assassination Czar. Brennan was eventually confirmed, though he received the largest number of “No” votes in US history.

Paul’s reasoning about using the Constitution, rather than the drone to eliminate terrorist who are not engaged in imminent threats against America is as follows:

My preference would be that we try Americans accused of aiding and abetting terrorism as traitors. But if they don’t return, or won’t return, try them in absentia.  The Constitution makes clear that treason is a federal crime.

We should also remember this was the same man who was invited to dine at the Pentagon just months after 9/11. Could the same people whose judgment we trusted to invite al-Awlaki to wine and dine in Washington, also be mistaken in their judgment in their decision to assassinate him? We will never know, because this American citizen never received any trial or due process.

This is not to say that drones should never be used, and they have been used sometimes to good effect.  But some in the military community have argued that our current drone program actually makes the nation less safe and undermines our national security.

Kirk Lippold, Commander of the USS Cole, which was attacked by al-Qaeda in 2000 under President Bill Clinton, said of Barack Obama’s drone policy:

“This president, in my opinion, has fundamentally undermined our ability to defend this nation by killing terrorists rather than capturing them and taking them to an intelligence facility like Guantanamo Bay and learning how these groups operate. And while the program appears on the face to have had great success, I think ultimately the drone program is setting us up for failure because for each high-level terrorist you kill, that is a high-level intelligence asset that is no longer available to exploit.”

Paul didn’t dismiss the usefulness of drones on the battlefield, but what he did point out that drones “are a unique tool. They are a tool that enables the Executive to stretch the limits of Congress’ authorization of force. That is even more true when targeting American citizens, and drone assassinations should not be used in lieu of due process. The Constitution already provides a guide for dealing with citizens suspected of collaborating with radical terrorists-try them for treason. Domestically, drones open up endless possibilities for surveillance of Americans. We should use the Fourth Amendment as a guide to set limits on all government surveillance, including drones.”

He then concluded that “Drones are a tool that is allowing the Executive Branch to push the limits of what constitutes constitutionally proper policy. As drones become an ever-growing part of our counterterrorism strategy abroad, their technological capabilities to locate, identify, follow, and monitor advance as well-facial recognition, license plate readers, and infrared scanners.  We already have drone manufacturers looking to expand their market by converting these technologies for domestic function and marketing them specifically to law enforcement-which can even be scooped up with federal grant money. And the whole cycle is driven, in part, by the growing use of drones as a counter terror tool.  Making better, more efficient drones abroad will only make it harder to restrain drone surveillance at home.”