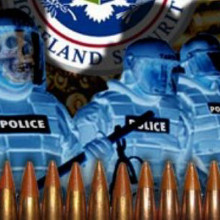 Republican Senator Jim Inhofe (OK) and Rep. Frank Lucas (OK) have introduced a bill, Ammunition Management for More Obtainability (AMMO) Act of 2013, in their respective chambers, that would prohibit every federal agency, except the military, from purchasing more ammunition each month, than the monthly average it purchased from 2001 to 2009. This comes as questions surround the large number of solicitations by federal agencies for ammunition and weapons purchases and the apparent stockpiling of ammunition by the Department of Homeland Security.

According to the press release by Inhofe and Lucas:

The legislation would require the Government Accountability Office (GAO) to conduct a report on the purchasing of ammunition by federal agencies, except the Department of Defense, and its affect on the supply of ammunition available to the public. The AMMO Act would restrict agencies from obtaining additional ammunition for a six-month period if current agency stockpiles are higher than its monthly averages prior to the Obama Administration.

“President Obama has been adamant about curbing law-abiding Americans’ access and opportunities to exercise their Second Amendment rights,” said Inhofe. ”One way the Obama Administration is able to do this is by limiting what’s available in the market with federal agencies purchasing unnecessary stockpiles of ammunition. As the public learned in a House committee hearing this week, the Department of Homeland Security has two years’ worth of ammo on hand and allots nearly 1,000 more rounds of ammunition for DHS officers than is used on average by our Army officers. The AMMO Act of 2013 will enforce transparency and accountability of federal agencies’ ammunition supply while also protecting law-abiding citizen’s access to these resources.”

“After hearing from my constituents about the shortage of ammunition in Oklahoma and the Department of Homeland Security’s profligate purchases of ammunition,” said Lucas. ”We have introduced the AMMO Act of 2013 to curtail these purchases so Americans can exercise their Second Amendment rights without being encumbered by the federal government. I was surprised to find out the DHS has the right to buy up to 750 million rounds of ammunition over the next five years, while it already has two years’ worth of ammo already. This is an issue that must be addressed, and I am pleased this legislation provides us the opportunity to do so.”

Democratic Rep. John Tierney (D-Mass.) questioned whether “conspiracy theories” about government attempts to strip American gun owners of their bullets or government plans to stockpile bullets in preparation for a civil war were the driving motivation for the hearing.  He pointed to the overwhelming role the blogosphere has played in questioning why DHS needs millions of rounds of ammunition.

“To the extent that we’re responding to conspiracy theories, I think we’re really wasting everybody’s time on that,” Tierney said.

“Unsubstantiated, false conspiracy theories have no place in this committee room, hopefully. Federal ammunition purchases are a fraction of the ammunition market and they’ve been decreasing in recent years,” he said.

The National Rifle Association agreed with Tierney and wrote to its members that they should not be concerned with the mass solicitations by DHS. “Skepticism of government is healthy. But today, there are more than enough actual threats to the Second Amendment to keep gun owners busy… there is no need to invent additional threats to our rights.”

It is telling and I hope encouraging that representatives in Washington are hearing from their constituents and at least attempting to question and deal with the issue of ammunition obtained by federal agencies. House Appropriations subcommittee chairman John Carter (R-TX) pressed DHS Secretary Janet Napolitano on the issue and Representative Jason Chaffetz (R-UT) questioned DHS representatives just last week claiming that DHS has “roughly 1,000 rounds more per person” that soldiers in the U.S. Army.

I even ran the numbers provided to Senator Tom Coburn (R-OK) by DHS back in November 2012 and clearly saw where they are stockpiling ammunition with approximately $37 million more to spend in Fiscal Year 2013. Even as I provided this information to DHS and questioned them about it, wanting to obtain the information concerning ammunition purchases prior to those that were provided to Coburn, I was told that they didn’t maintain ammunition but use it up. That is clearly not the case when examining their own numbers. In fact, DHS has denied mass purchases of ammunition.

I see all of this as a positive response to you, the American citizens emails, phone calls, letters and faxes to your representatives. It has emboldened your representatives to call for such measures, which is supposed to keep the Executive Branch in check.