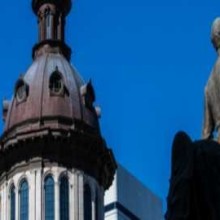 The South Carolina State House finally completed the Freedom of Health Care Protection Act, H. 3101, and advanced it through the Republican led House of Representatives. This bill is the tip of the spear in South Carolina’s effort to resist ObamaCare.  It will serve as a model for other states’ efforts to do the same.

The bill passed 65-34 along party lines. While some, like Minority Leader Todd Rutherford (D-Richland) claim that the contents of the bill are hollow and “amount to nothing,” others claim otherwise.

Rep. Greg Delleney (R-Chester), one of about three dozen sponsors, said it is a “resistance to the Affordable Care Act.” Many of the supporters claim it is not an effort to nullify federal law, though in this writer’s opinion, and that of our Constitutional scholar Publius Huldah, it should be exactly that and she aptly demonstrates here, here and here.

According to The State:

An earlier version of the bill, sponsored by state Rep. Bill Chumley, R-Spartanburg, would have nullified Obamacare, and imposed felony and misdemeanor penalties on anyone who helped carry out any of its provisions. However, Chumley became embroiled in controversy after he authorized using a state-owned plane to bring a conservative pundit to Columbia from Washington, D.C., to testify at a subcommittee hearing. Some House members also raised concerns about his proposal’s penalties and outright rejection of federal law.

In response, the House Judiciary Committee worked out a proposal that it says limits the bill’s scope only to those parts of the health-care law that the state deems unconstitutional, Delleney said, comparing it to “resistance” by states to a national identification card. The bill also only affects “state actors,” not federal employees.

Rutherford, who proposed two amendments to legalize marijuana into the bill, both of which failed, said that the bill’s only impact would come if Alan Wilson of Lexington, the state’s Republican attorney general, blocked health insurance companies by court action, from complying with the health-care law. He claims the bill allows for legal action, but says that Wilson “has sense” and so will not do what is necessary.

Rep. Tommy Pope (R-York) spoke with Freedom Outpost and told us that the bill put forth by Chumley, in his estimation was unconstitutional. Chumley’s bill would have arrested federal agents that sought to come in an implement Obamacare along with state officials who attempted to help them implement it. Pope said that Delleney’s bill was, in his opinion, “the Constitutional version of nullification, which is prohibiting state actors from doing certain things.” In other words, it would mean the state will not assist the federal government in implementing or carrying out the Affordable Care Act law.

Pope used the example of Colorado and their passage of a law in which they ignore federal laws against marijuana. “As far as Colorado is concerned, it’s not illegal,” Pope said. “But if the DEA (Drug Enforcement Agency) comes to Colorado tomorrow to chop down a marijuana field, Colorado is not going to arrest them, they’re just not going to help them.”

Ultimately, Pope was saying that the law would force the Feds to enforce the law themselves and he said practically, “If you (the state) don’t help, it caves in on itself because the Feds don’t have the resources to implement all of these things.”

He also said that lawmakers had to be careful about the legislation they put forward because of the myriad of things that were wrapped into Obamacare. “It’s kind of like a cancer wrapped around a healthy organ and you’ve got to be able to do surgery to cut it off and to be able to keep the good while removing the bad.” He was referencing things like Medicare.

I am one that wholeheartedly believes we need to reverse things like Medicare and Medicaid, along with Social Security. We cannot talk about “personal responsibility” and not being dependent upon government, while engaging in such social welfare programs. However, I do understand the approach is not to create more chaos by eliminating things immediately with a full on nullification, when Obamacare is wrapped up in all sorts of other programs that are currently in place. Those things will need to be taken care of in our near future as well. At least for now, we are seeing a positive step forward in the State of South Carolina on behalf of the people, rather than on behalf of the Federal government.

The next stop for the bill will be the South Carolina Senate this week.